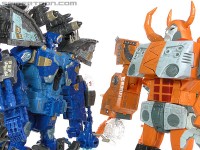 A salvo of bullets are directed at you. They are coming and wish to take up residence in your body, desire to snuggle into your internal workings. You elude them—barely. A terrible noise then pierces your audio receptors. You look up, witness a missile scream past, the interval between you and it scant. Any closer and you would have been destroyed. You clasp your weapon in your hands, raise it, aim it, prepare to kill with it.

Who are you fighting for?

Your optics covert into slits as you survey your surroundings. Your vision only manages to capture one feature: utter destruction. Fire consumes vegetation, vehicles, and many buildings, thick smoke sits in the sky, denying the sun's light of touching the area you have found yourself in. Blood and debris coat the ground in a hideous mixture. And although it is impossible to avoid you press on, optics alert, finger hovering over the trigger.

Why are you fighting?

You come across a young woman lying on the ground. She is fashioned in a somewhat unnatural position. There are deep red stains on her clothes and splatters of red envelop her. She is still. But then she groans, coughs, and her body trembles.

Do you help her or eliminate her?

Feet crunch over the debris scattered all over the ground, grabbing your attention. You snap your head in the direction of the noise; it increases, clearly drawing closer. Fresh cacophonies of battle commence a short distance away, but you are focused on the approaching stranger. Your optics dart from left to right, trying to determine his location.

Is he friend or foe?

You don't take that risk. Your mission is far too important. Success is your only option. Your hand curls around the handle of your weapon firmly, finger caressing the trigger.

A figure emerges, appearing insignificant in your sight. But he approaches steadily step by step. You begin to lift your weapon and train it on the figure. As he gets closer, his insignia becomes recognisable, his intentions evident.

What decision do you make?

Are you an Autobot or a Decepticon?

A new planet has been discovered. Infiltration protocols have been initiated. Two factions now overlook the planet, for very different reasons. The Decepticons seek to plunder Earth's bounty of rich resources, while the Autobots endeavour to stop them in their conquest.

Your role in this adventure could mean the difference between freedom and slavery for its inhabitants—preservation and destruction for its future. But the choice is all yours to make. Select your side, grab your weapon, and fight for what you believe in.

Because that is what your foe will be doing.


Join Seibertron.com's very own RPG today! Be part of the action and get all the information you need to start your journey into the never ending battle between good and evil by clicking here.. Good luck!

Thats on the main link bar, under the name..."game"

Thats on the main link bar, under the name..."game"

Insidious wrote:They've both co-existed for a long time. Each game offers its own creative outlet.

Insidious wrote:They've both co-existed for a long time. Each game offers its own creative outlet.

Heavy Metal War Version 2.0 is a discussion best reserved for the HMW forums. All in all, as you can probably guess, these are two seperate games and two different styles. The HMW Game only has two creative outlets. The first being how you develop your character's profile, and the second on how you level up your characters as well as what you choose to equip them with. Beyond that its primarily all up to luck and the Random Number Generator programs that are the heart and soul of that particular game.

While this particular style of game is the sort that will help develop multiple creative skills. From story telling to writing. Trust me on that one. You get to take on the personality of your character and have direct influence on how your character develops and how events unfold as the game proceeds. Heck, when I started this particular game I was at a paragraph or two a post... now I can write epics. Its a great way to practice and do it while playing in a universe you enjoy.