The Second Cyberverse Movie "The Perfect Decepticon" is now on Youtube 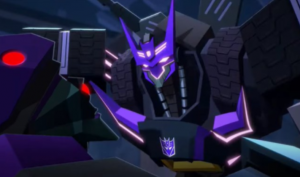 Great news for all those following the Cyberverse show, the second movie is now available on Youtube for all to see. It is called "The Perfect Decepticon" and features the debut of Tarn in this universe. You'll let us know what you think. We thank Sabrblade for bringing this to our attention.

I legit laughed at "Trypticon Park" poor Trypti. Guess it's better then getting turned into a space ship and forgotten about.

I've said before that I almost didn't give this show a fair chance after the first few episodes. Chalked it up to just dumb playing down to kids. But then I came back to it, and saw named characters get on screen killed. I was like.. wait, WHAT!, then I went back and watched everything. All in all, it did have its dumb kiddy cartoony moments, but so did Beast Wars and Animated, both shows I hold in high regard. Ultimately Cyberverse turned out to be a great show, with lots of nods to both cartoon and comic lore of yesteryear. I mean we basically have Underbase Starscream in this. While I wouldn't quite put it up there on my personal best lists with Beast Wars or Prime, it does come close with Animated.

Give the whole thing a watch, and keep with it into the second season before you write it off. it is worth it imho. I genuinely hope this show succeeds in spawning a new generation of fans.
Re: The Second Cyberverse Movie "The Perfect Decepticon" is now on Youtube (2121589)
Posted by chuckdawg1999 on November 22nd, 2021 @ 12:03pm CST

He extracted his own sinful spark in an attempt to kill Heaven, but Cheetor countered its effects by cleansing the Allspark with his own pure-hearted spark. Way back in the four-parter "Battle for Cybertron".

I barely remember any of that. I guess they had to get him out of the way for the story to play out like it did.