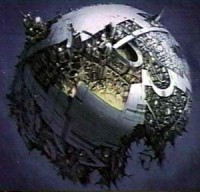 I want to apologize but there will be no monthly Transtopia art challenge this month, as someone needs the help of the superhuman life-forms that call themselves artists. Yes Seibertron.com's site game Heavy Metal War (HMW) is prepping for the conversion to 2.0!

Question: Now of what concern would that be for an artist?

Answer: The game needs a map!

So instead of Transtopia's monthly art challenge for October, I present you with the Transtopia "Give HMW a map of Cybertron" art contest!

Now, what HMW needs is a map of the planet of Cybertron but it has to be unique. There are actually many maps of Cybertron out there but they are all of a giant ball that never reveal what lies behind it and HMW's programmer needs a flat map.

Now the map should come with all the major locations of Cybertron like:

Crystal City etc., but also new cities and locations that you think would be cool.

Now the prize is that the winning map will be part of the game, will be used by all HMW players and full credit will be given to the map's artist.

As this is a bit of a difficult or more complex challenge you have till the 2nd of November to submit your map. All maps should be submitted in the appropriate thread by clicking here.


Updates to this event will be posted if needed.

And don't worry, the Transtopia monthly art challenge will be back for November so see you then!

This is the first update on the Transtopia HMW art contest so if you want to know what this is all about please click here Thank you.


Hi guys, Im Psychout, one of the staff for the Heavy Metal War game and most of you will have already come across Burn at some point in here, we'll be two of the judges for this unique competition.

As this contest is to make a map for the actual game hosted here on SEIBERTRON.com and advertised across the entire internet and fanbase, the HMW staff have gathered together some information that we hope may be helpful for you.

The game setting will in a pseudo-G1 era outside of standard canon, and naturally some existing location details will need to be jumbled for game-logistical reasons, so please don't think you have to stay within the existing canon - feel free to use your imagination.

We also have of locations/zones we are currently considering for use in the game you are welcome to use, but again this is open to your interpretation as you guys are the artists, please feel free to involve as many or as few of these places as you'd like and add any you wish:
Iacon
Kaon
Altigon
Axiom Nexus
Ankmor & Gygax
Kalis
Neutral Territories
Novacron
Polyhex
Praxus
Rust Sea
Stannix
Thunderhead Pass
Tyrest province
Uraya
Vilnacron
Vos & Tarn
...


Please note this competition will also be opened to the players of HMW, so you might have some competition there. Feel free to drop into the Heavy Metal War: General Discussion forum if you have any questions, or contact any of the HMW staff via our PM's.

Thanks guys ...and good luck!!
Psychout.

that place is soo rad
Re: The Seibertron.com Transtopia/ Heavy Metal War art contest - UPDATE! (1015876)
Posted by Dead Metal on November 2nd, 2009 @ 3:22am CST
So it's the 2. of November which means the dead-line for the Transtopia HMW art contest is reached. If you haven't submitted your entry by now we're sorry but we can no longer except it.
The HMW team will now review the entries and announce which one they choose to be the official game map for Heavy Metal War.

Thank you for your entries.