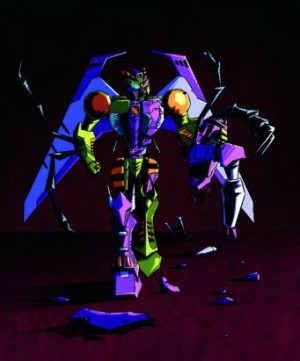 Courtesy of TF_JW, we have several prose stories from the Transformers Club. These may very well be the last prose stories we ever get from them and they offer us the end of their BWU storyline.

There are three stories for you fans, including the very last story from the Shattered Glass universe. The links can all be found below with a description for each. Enjoy!

derailment_thumb.jpg
After six years of brutal warfare, Lio Convoy’s rebellion is at its end. The Vehicons are on the march, assimilating everyone and everything in their path. But the Resistance won’t go down without a fight, and there’s no line Lio Convoy won’t cross to save the Maximals and Predacons from horrific annihilation. Virtually every character ever seen in Beast Wars Uprising (including some dead ones) grapple with the Vehicon Apocalypse in Derailment, the titanic climax of the Grand Uprising.

With a cast of hundreds, Furman-esque levels of carnage, and amazing art by Guido Guidi, Josh Burcham, Matt Frank and more, Derailment is a full-on Beast Wars Uprising novel, available only from Fun Publications.

TF_JW wrote:The BWU coda: The Inexorable March is up now as well!!

And with it, the BWU universe is at an end...

With the Fourth Cybertronian War over, Cybertron is in an unusual state: peace! But what can peace mean for a species as bellicose as the multitudinous flavors of Cybertronians?

Explore a thousand years of future history in The Inexorable March, the Beast Wars Uprising coda, by Jim Sorenson and David Bishop, with art by Guido Guidi.

It is the year 2011... Transhuman cyborgs, secret Underbase agents, and missing Autobots are leading to one mystery after another. How are they all linked? And can Cyclonus - a Decepticon labeled a traitor by nearly his entire faction - find out the truth before a heinous master plot can be put into motion?

With a cast of familiar faces, new faces, and faces that have long since changed, Coalescence will fill in the missing pieces to the Shattered Glass story line, and bring the universe closer to its closure.

Yes. Last I heard, Hydra was working diligently to get that last one done in time for the deadline.

Although, in a Q&A held elsewhere (which I think you might have participated in as well), Jim revealed the titles of three more BWU stories that he won't get to tell before the deadline, but might have written had he had more time to do so:'Tis a shame these may not see official release anytime soon.
Re: Three Prose Stories from Transformers Collection Club Now Online (1849346)
Posted by G.B. Blackrock on December 29th, 2016 @ 12:17am CST


I've transcribed the next chapter of the Gobots' journey to the best of my ability, so it should be up right away,

The ending is... Well, I don't know what to call it but unnerving.
I'd like to hear everyone's take on it.

I encourage those who have participated thus far to send their messages of support to #gobots.
Thanks go out to all those who lent their voice to the project!

Re: Three Prose Stories from Transformers Collection Club Now Online (1849378)
Posted by TF_JW on December 29th, 2016 @ 7:45am CST
Some behind the scenes tidbits and explanations... I'll put them in a spoiler tag for those that haven't had a chance to read the story yet.

"Coalescence" does not take place directly after "Transhuman". "Transhuman" was published in July 2011, but it was set before/during the 2009 Club Comic story, given that Megatron was still Megatron. This is why I made sure to specify that Coalescence is in May(ish) 2011 as I knew that there would be inconsistencies with some character/plot treatments given the change in creative team and 5 year dormancy. Some of those inconsistencies being unintentional, some intentional, but either way a two year time leap seemed like... well maybe not a good way but... a way to smooth some of those over without devoting too much time in text.

I approached Trent to get notes for their original take for the story, and included as many of those ideas as I could... Their endgame though wasn't really possible, unfortunately. The initial concept was that the Underbase was sending out agents to set events in motion that would lead to Unicron taking notice of the SGverse. That didn't seem like a route to be revisited with "Another Light" having brought Unicron into the universe through different means.

The defeat described by the Fallen at the beginning is not RotF. But is probably a Tyran stream given the similarities. He should stay out of that cluster...

The title as well as the relationships formed between sets of characters are both meant as a purposeful counter to the notion that the universal trend is entropy. Cybaxx, in particular, and Boltax were obsessed with raw data and information rather than emotional investment and therefore overlooked anything like that.

Cybaxx and Beta Maxx's feud started when Cybaxx took Beta's stapler, the one that he brought from home :p It's actually completely coincidental, but some of Cybaxx's dialog was inspired by Gary Cole as Bill Limbergh while Beta Maxx's "voice" was written with an ear towards some of Stephen Root's anime voiceovers. I laughed out loud when I realized what I'd done

I wanted to "return" Hot Shot/unreleased BiaB Smokescreen toy to an Armada universe, even if I didn't have a particular Armada universe in mind. Hence his spotting Blurr and Jetfire in the universe the Underbase groupies sent him to. For Demolishor, his sacrifice was the catalyst that made the others realize they too were merely subjects of the Fallen's experiments, just like the cyborged humans/aliens. And how atrocious the whole thing had gotten. So I wanted his death to take place in a notable TF historical event... Even if that event was in a new universe.

Be prepared to see Drift's character undergo a bit of a transformation the next time you read him.

I tried to get a Chifumi Takahashi reference into OMAM, but didn't have room for it. So I made sure to fit one into the "modern" epilogue to name drop her. She never made it back to her Cymond Earth, but she's happy and thriving in her new home. (She's "Dorothy" who first appeared in an I-Queue extended answer, the individual who recovered a Star Saber shard from the Transtech for Aquarius.)

I wanted readers to still have representations of the Nexus Prime crew, but at the same time I wanted to make it obvious that these were now specifically the SG versions after the events of "Another Life" destroyed the singularities. That's why they're all described the same, but have different names... Except Heatwave who was the team member originally found in the SGverse so I thought it would be a nice nod to that if he kept the same name.

The original ending was going to have the Nexus buddies find SG Fallen, whose character I never fully fleshed out in my head, but it seemed more satisfying to bring Depth Charge (and Waspinator) "back" and resolve that story a little more than just leaving him/them in the past.
Re: Three Prose Stories from Transformers Collection Club Now Online (1849645)
Posted by Targetmaster Kup on December 30th, 2016 @ 12:17pm CST
They are selling some stickers now too!

You can choose one of four Beast Wars Uprisings decals (trading card size) to go with the decal sheet.