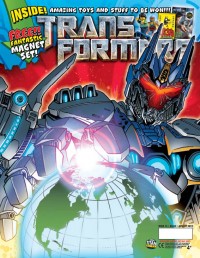 Once again, Kathleen Green, Marketing Officer of Titan Comics UK, has dropped by to let us know that the next issue of Titan's "Transformers" comic will go sale Thursday, July 15th.

She's also given us a quick synopsis and a preview of the cover plus three pages:

Check out the latest issue of Transformers Comic for action-packed features,
games, puzzles, competitions and lots more! Issue 2.15 also includes "Making
Waves", a fantastic comic story written by Robin Etherington and featuring
art from Jon Davis-Hunt. Find out more on the story from the synopsis below
and check out the sneak peeks attached!

Making Waves
SOUNDWAVE has been under orders from Megatron to cause as much mayhem as
possible without being caught by roving NEST forces. Striking from the
upper atmosphere, Soundwave uses his spread of sonic cannons to sink ships
in the Atlantic Ocean. But, NEST troops that have been monitoring the
pattern of his attacks. Thanks to Titan Comics UK for the preview, and as always, Seibertron.com is your source for Comic news!

ive missed LOADS of this stuff but they DID do mini comics ala mangas for the version 1.o version of this comic. does anyone know if they intend to do the same for these?

i'd really like to get a trade of this stuff.