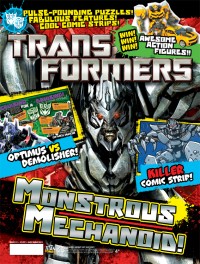 The kind folks over at Titans Comics UK has sent us a little preview of their latest Transformers featurette, containing more movie-verse action! The comic is available tomorrow! Check out the preview below!

The latest issue of Transformers Comic is on sale this Thursday, 7th April! Check out issue 2.21 for action-packed features, games, puzzles and lots more! This issue also includes ‘A Short, Sharp Lesson!’, a fantastic comic story written by Simon Furman and featuring art from Jon Davis-Hunt. Plus there are competitions to win Transformers action figures, two free gifts and amazing Transformers 3 news inside!

Find out more on the story from the synopsis below and check out the sneak peeks attached.

MEGATRON – alerted to Bludgeon’s unsanctioned machinations by double-agent Wheelie, Megatron returns to the fray with a vengeance. But for once, it’s not the Autobots on the receiving end of his wrath — it’s Bludgeon himself. Serious battle is about to warm up the icy Russian tundra!

Sadly the previews Titans give us have no dialog. I also believe that Titans Movie-verse comics are non-canon too.