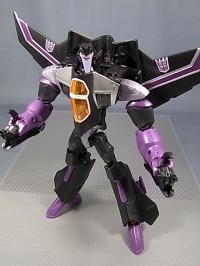 Takara Transformers Animated Wave 4 has officially hit the Japanese stores this weekend, this article we have a good look on Japanese version of Skywarp, one of the Starscream's clones. You can view all the remaining images of Skywarp over at Alfes 2010's blog.