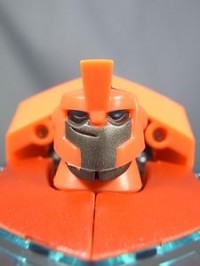 In the Japanese version of Transformers Animated cartoon series, Bulkhead is renamed as Ironhide. Whereas the Ironhide in the cartoon now is Armorhide.
So it is no surprise that the Takara version of the toy is now Autobot Local Combatant - Armorhide.

Again, courtesy of Japanese Transformers collector - Alfes 2010, we get a closer look on this Deluxe class figure. You can view the full gallery here.

Of course don't forget to compare the Hasbro version of the toy by clicking here.