We're ending summer with a well rounded release that hits all the bases!

Siege Springer gets a brilliant set, to match the fantastic that he is:
https://toyhax.com/for-siege/2806-label ... inger.html

TR Trypticon gets his very own Chief of Engineering with this conversion set for Siege Brunt, into Deadlift:
https://toyhax.com/for-siege/2812-label ... dlift.html

There have been lots of requests for labels for ZT Kronos, we've happily obliged with this beast of a set:
https://toyhax.com/mp-scale/2816-labels ... ronos.html

SGM
Re: Toyhax August 2019 Update - Tetrajets, Springer, Brunt, and More (2037738)
Posted by ZeldaTheSwordsman on September 10th, 2019 @ 8:28pm CDT
I agree with you about Shockwave, those actually look quite nice.
But I think the only sticker on Springer's sheet even quasi worth a damn is the chest one, although even that is tainted by being yellow. The greebling stickers are just as horrendously clashing and hideous and gratuitous on the SIEGE toy as they were on the original, maybe even a little moreso (Blurr and Hot Rod have the same problem). And the less said about the window stickers, the better.

On a more positive note, I like the Super Zeo Megazord sheet. It would be perfect if they made a replacement crown to go with it, but it's still a delight to have that available.
Re: Toyhax August 2019 Update - Tetrajets, Springer, Brunt, and More (2039736)
Posted by D-Maximal_Primal on September 27th, 2019 @ 6:43pm CDT
We're very excited to bring you our next ONE CENT promo set! It's the first set for the new Siege Omega, and focuses on upgrades and base details for Countdown. Act quickly, the promo price ends this weekend!
https://toyhax.com/for-siege/2830-label ... -base.html

Finally, you can complete your collection of Siege Seekers with our tailfin and labels for Skywarp:
https://toyhax.com/for-siege/2825-parts ... ywarp.html

As always, we take our sets for Micromasters seriously. Take a look at the Sports Car Patrol:
https://toyhax.com/for-siege/2826-label ... atrol.html

Re: Toyhax August 2019 Update - Tetrajets, Springer, Brunt, and More (2044562)
Posted by SGMLordMirage on November 13th, 2019 @ 6:39pm CST
Something alittle different. I was able to find a decent G1 Powermaster Optimus Prime at the TFCON in DC. Only obviously thing wrong with it was it didn’t have any stickers. I bought the set from Reprolabels and just finished applying the stickers. Glad I bought this set, cannot complain how it looks now. I do recommend this set if you are wanting to spruce up your Powermaster OP.

SGMLordMirage wrote:I don’t think so. I didn’t show this to anyone after I bought him. He stayed in the bag. I might have bought mine for 70 i think.

I ran into a dude Saturday night who somehow got a Powermaster Prime for $60 complete, was pretty awesome to see. 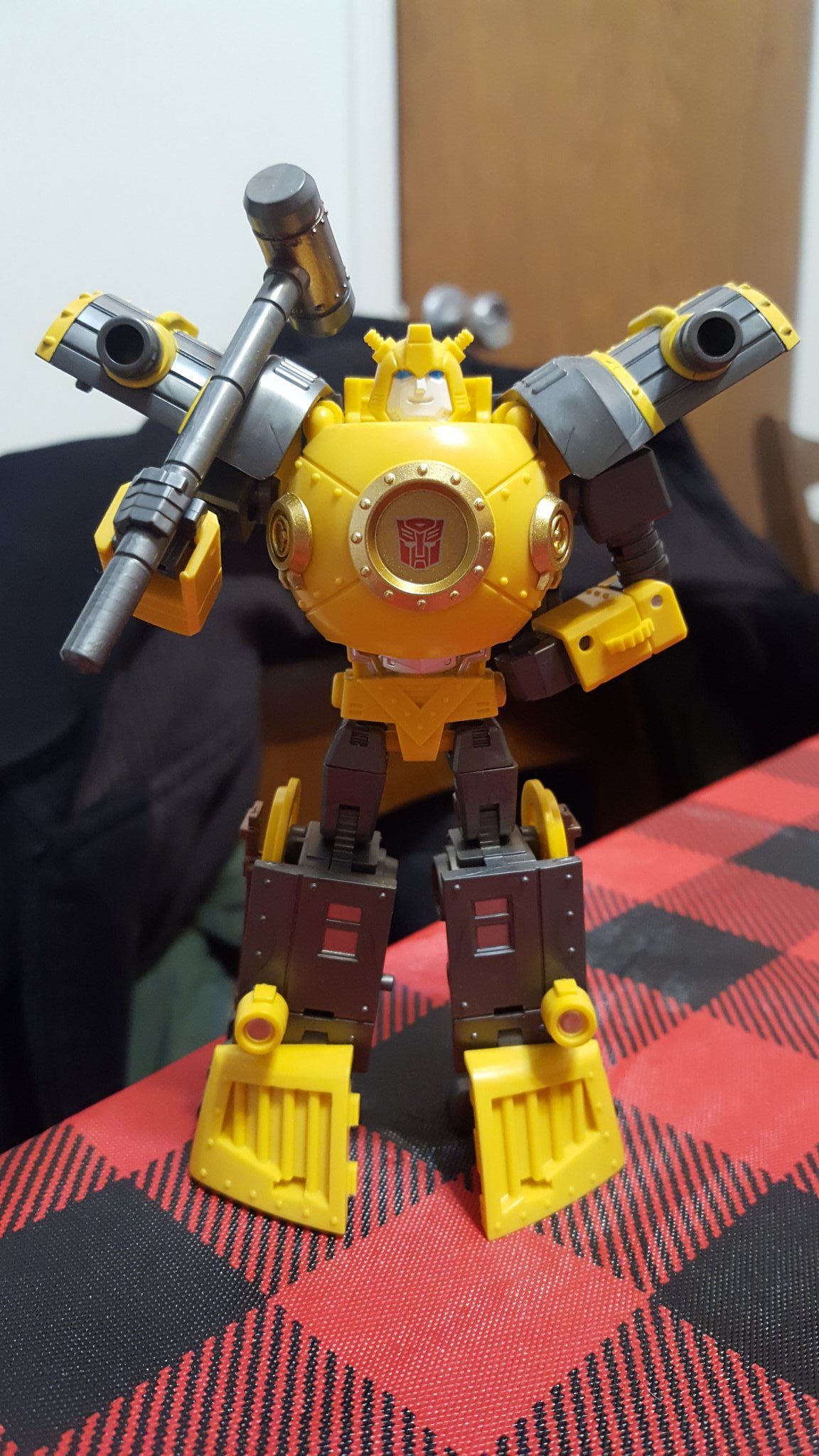 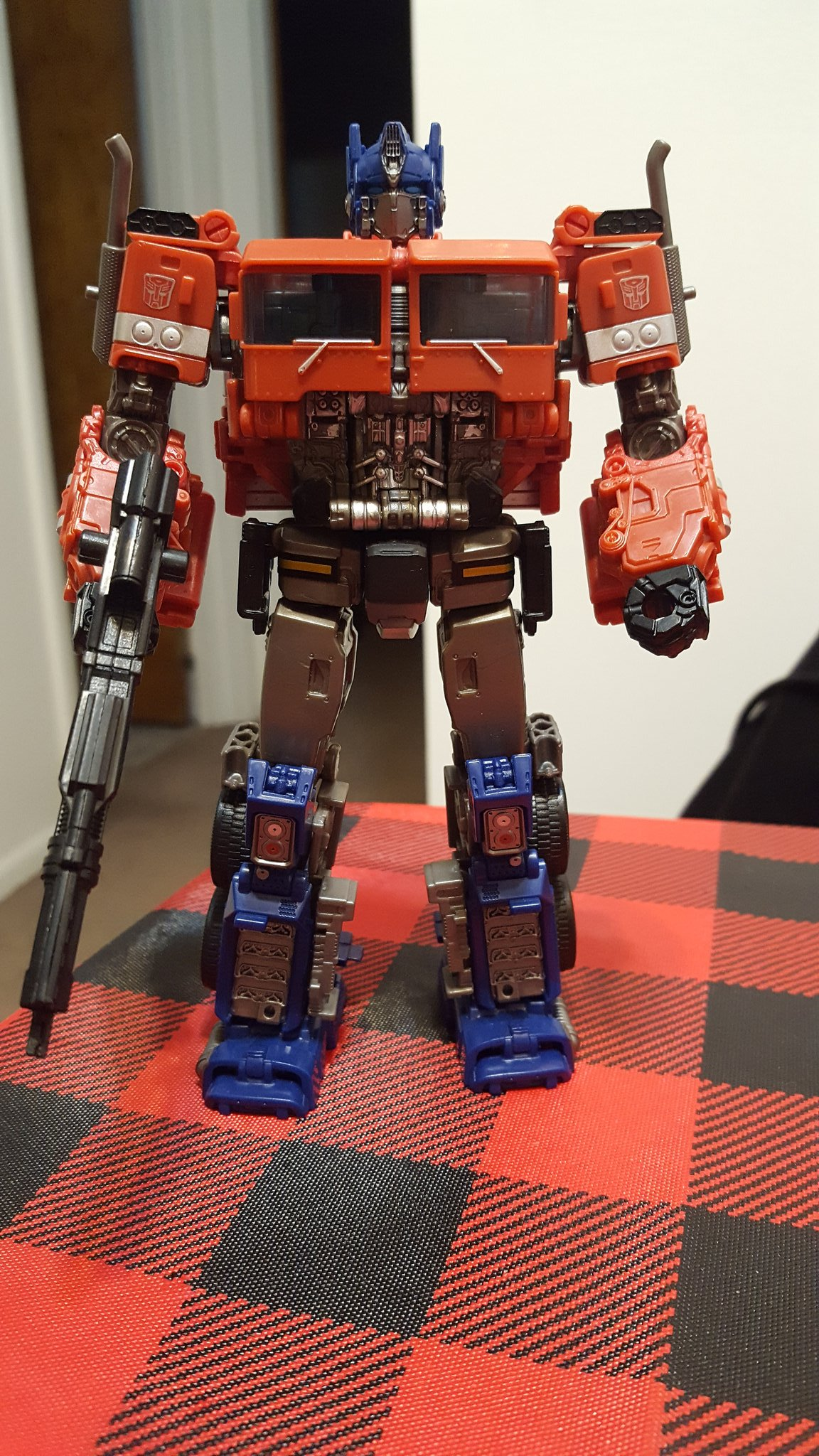 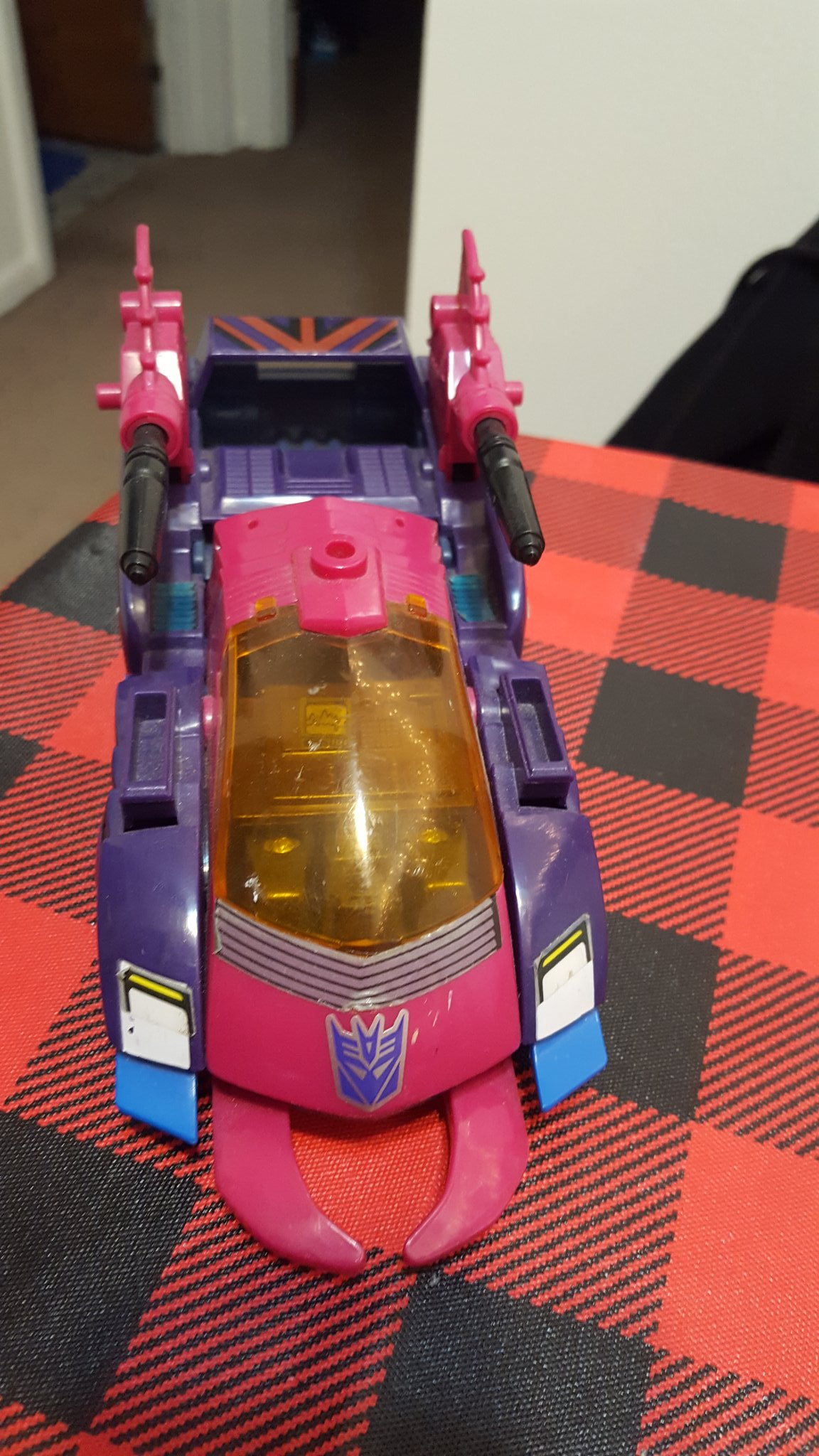 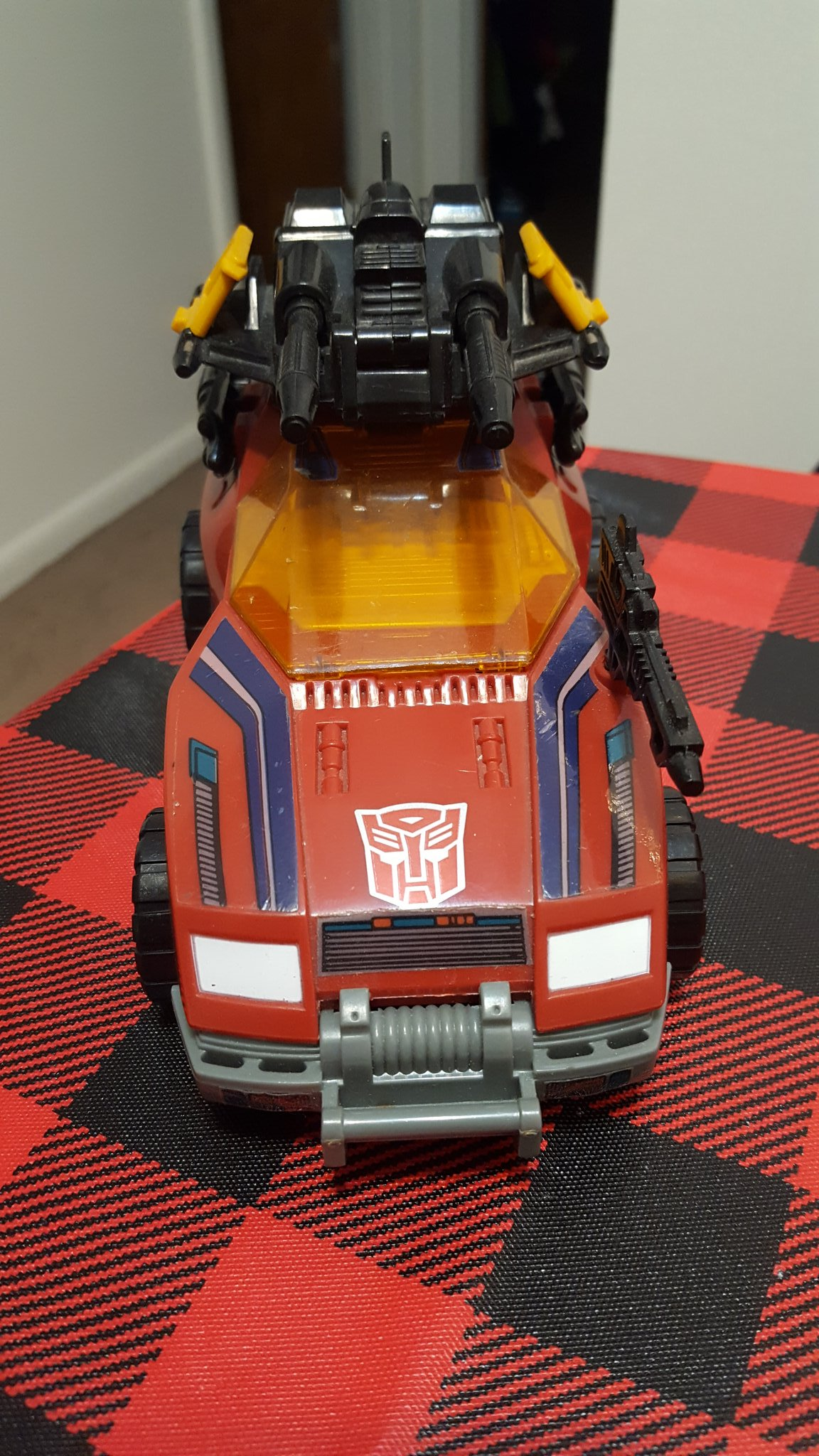 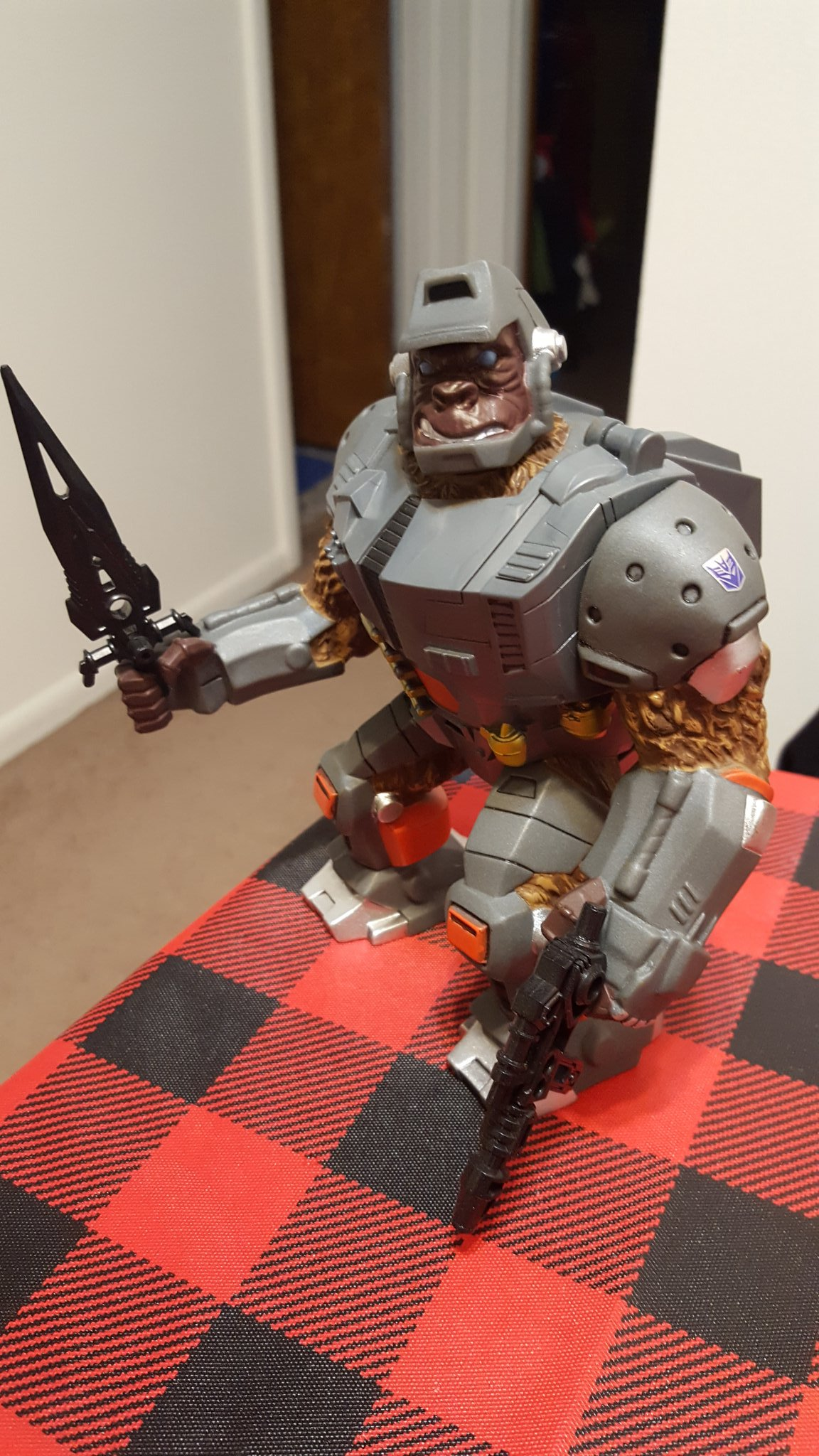 Re: Toyhax August 2019 Update - Tetrajets, Springer, Brunt, and More (2046274)
Posted by ZeldaTheSwordsman on December 6th, 2019 @ 8:21pm CST
The Mirage sheet needs to be withdrawn for alteration (and preferably given an alternate version). As-is, it's just plain not up to snuff. For one thing, it's missing something it seriously needs: A corrective Autobot sigil for the vehicle nose just in case the factory botched it (as seen below).

I was really hoping the SIEGE Mirage sheet would account for the possibility of that error, but alas.

There are more flaws beyond that oversight (some of which I realized as I was typing):
* The "CITANES" and "26" stickers for the sides are just plain half-assed. There is absolutely no excuse for not having "CITANES 26" or "26 CITANES" as all one label in the blue area, especially when HasTak managed it on the factory decals. On top of that, having the 26 on the engine details looks really stupid, especially in robot mode.
* The shoulder stickers are completely wrong; they should be split into two parts and not be on the shoulders at all. Here's a G1 Mirage for reference: 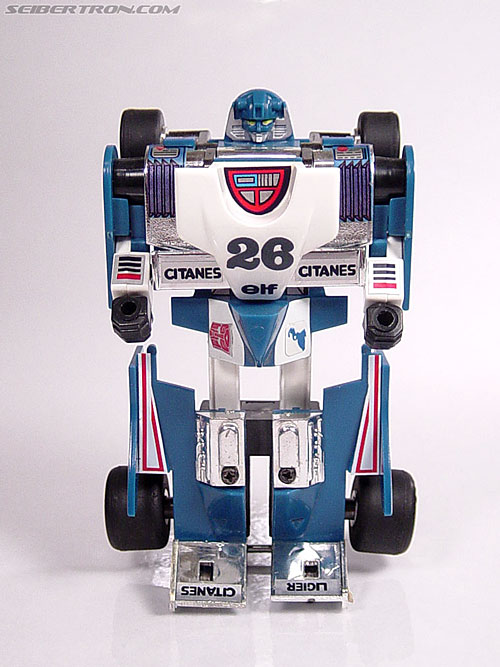 ** The silver decals with the red dots and black lines should be above his chest, to either side of the faux-parts JS-11 nose
** The purple vent decals should be modified to go on the actual molded vents on the SIEGE figures chest that correspond to the decal from the G1 toy.
* The forearm stickers would be better off omitted, or else widened to cover the molded stripes neighboring them. As-is, they just look.. off.
* Given the intent to make it look more G1, the cockpit sidewalls should actually be white, not blue like the rest of the body. The dancing girl decal should also be a separate label, so that people can pick which side to put it on, if they want it at all.

IMO, it could also do with coming in a "stripped-down" version for people who don't mind SIEGE Mirage's clear blue plastic. Because if you're fine with the transparent plastic, that renders almost half the sticker mass pointless.

EDIT: I also see that they still haven't updated Tor to have the thruster decal as an optional. Saddening, but it might be that they're having trouble sourcing an original or good pic thereof and thus it's beyond their control. What is in their control is that they have not yet redone the Galaxy Upgrade Optimus set (which is half-garbage IMO: '80s cartoon-style cel shaded windows do not belong on a Cybertron-based figure, and the stickers for the lightbar halves are completely wrong. They should be covering the lightbar halves entirely in blue to make up for them not being painted, and there should be corresponding stickers for the faux-parts cab halves. Instead of the abomination window stickers, it should have some stickers for detailing the leg guns. IMO the only window sticker that would actually work on that figure, is a sticker mounted behind the glazing that depicted Cybertron Optimus' Matrix compartment. The cel-shaded ones just make it look like more of a cheesy bootleg of the original than it already does).

So that this post isn't completely negative: I look forward to when they get around to doing a Clampdown conversion set for Red Alert. SIEGE Red Alert's red wheels and cartoon-color head notwithstanding, decals are the only difference between the two deco-wise so Clampdown is an ideal candidate for such a conversion.

Also, I think it would be really neat and helpful if they made duplicates of Sideswipe's launcher and rocket to go with the Red Alert sheet, and a duplicate of Red Alert's gun to go along with the Sideswipe sheet. that and a secondary set of taillight stickers for each that's drawn to fit the SIEGE figures' sculpted taillight detail, but that's me
Re: Toyhax August 2019 Update - Tetrajets, Springer, Brunt, and More (2051035)
Posted by william-james88 on February 1st, 2020 @ 7:59am CST
We've now released upgrades for Transformers in 4 separate decades

Check out our first offerings for the 2020s:


Siege Soundblaster gets some splendid options for his chest window, as well as plenty of other details:
https://toyhax.com/for-siege/2887-label ... aster.html

We've also decided to add in this window amendment set, for anyone looking for different options for any of the Siege Prowl mold variants:
http://toyhax.com/for-siege/2877-amendm ... ndows.html

Within the last few weeks, we've added a whole new category: The Toyhax Armory, where we'll be focusing on customizable handheld weaponry. If you haven't seen it yet, you can do so now, including our latest addition for Ratchet and Ironhide:
https://toyhax.com/371-toyhax-armory
Re: Toyhax August 2019 Update - Tetrajets, Springer, Brunt, and More (2051047)
Posted by ScottyP on February 1st, 2020 @ 10:05am CST
Meanwhile, I still await a Ratchet sheet that's cut properly and the Omega Supreme set I ordered mid-November that they've failed to ship twice now. Third time's the charm?

@ScottyP, that is crazy about your issues. I actually had to send them a note because their site was like locked, sort of. I did get a quick reply, it seemed with all the sales they had, they got over whelmed, perhaps. Hope you got your stickers.


I just recently bought the weapon for Siege Mirage Toyhax offered and the sticker sheet w/shoulder missiles for Smokescreen. Key part, i need Smokescreen, been lazy and haven’t bought him yet.

SGM
Re: Toyhax August 2019 Update - Tetrajets, Springer, Brunt, and More (2051145)
Posted by DMSL on February 2nd, 2020 @ 9:50am CST
We need more toy stages and the trimmed offerings back.
Click here to view additional comments about this topic at the Energon Pub Forums ...