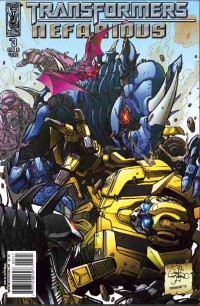 TRANSFORMERS: NEFARIOUS #3 continues the story set up in the previous issues, focusing on HASBRO’s possible next candidate for it’s robot HALL OF FAME, SOUNDWAVE (the movie version though).

NEFARIOUS is also the ‘official’ continuation of the movie-universe, taking place after the box office blockbuster movie, TRANSFORMERS Revenge of the Fallen.

As is often the pattern with middle issues in longer mini-series, not a lot happens to further reveal plot points, or add to the mysteries in this issue. It kind of holds the status quo.

In this issue we see Optimus Prime and Lennox at odds over N.E.S.T. related issues:

“Right now I’d rather face a dozen Megatron’s, than one Major William Lennox...”

Soundwave realizes further that he has lost control of Ravage and is not sure to who, or how he will regain Ravage into his strikeforce. But, he still saves some of his thoughts for his Autobot captors.

Speaking of Soundwave’s strikeforce, although imprisoned, Soundwave enacts measures to free himself from the N.E.S.T. convoy before he is moved into his ‘more secure location’ that Optimus and Ironhide are preparing for his arrival.

Bumblebee starts to feel the pressure of leadership, reminiscing on the loss of Breakaway in issue #1, and the fact that he has responsibilities to not only N.E.S.T., and Optimus Prime, but to the Autobot rookies under his command. This growth from Bumblebee has him making command choices that he may not have made previous to the events in issue #1.


A quick and ugly battle is fought again, as Soundwave’s mini militia returns to stage a rescue operation, first taking down the airplane transporting the prisoner guard force, and then working to destroy each accompanying guard member.

Bumblebee has to make a quick decision...keep Soundwave imprisoned or save his Autobot friends. What would Prime do?

Galloway, the man who now wants to shut down N.E.S.T, is angry that he is no longer allowed access to Hoover Dam, and pulls a Lennox, as he disobeys orders to continue to check it out. Enter a new toy-based character’s introduction to repel Galloway’s helicopters.

The art is still pretty darn good. Magno and Carter combine for a nice team, creating realistic, and true to movie and toy versions of the robots for the most part. The humans while excellently rendered, are not quite as faithful to the previous materials representations of them...but that doesn’t bother me in the least.

The introduction of characters who were ‘off-screen’ in the movie was nice, but we need to start seeing more of the fan favorites to help keep my interest. Let’s bring on some bigger names than Dune Runner, and Knockout...

Well, it’s a movie-verse comic, so it already has that going against it. The design of the robots bothers me, and the overabundance of human interaction bothers me.

And you know what is getting really old, overplayed...whatever? Bumblebee’s song/radio voice. It’s kind of nifty to see his inner dialogue compared to his vocal exposition, but having him only talking in songs and radio DOES NOT translate to the comic medium well.

The fact that nothing really unpredictable, or new happens in this issue pretty much makes this a stale issue story-wise; unless you really like movie Soundwave, or Bumblebee, or must see the ROTF toys coming to life in the comics.

So making your own Allspark is a good idea??? This plot point seems a bit contrived even for comic books, but I suppose, seems to fit quite well in the movie-verse.

TRANSFORMERS: NEFARIOUS #3 is released onto your local comic book shelf tomorrow, May 5th.

You can check out the five-page preview and see some of the fun for yourself!

Oh, gee, I wonder who that is. It couldn't be this guy, could it?

MYoung23 wrote:The cover makes it look like Bumblebee is getting mounted.

Re: TRANFORMERS: Nefarious #3- In Stores Tomorrow, reviewed here! (1071580)
Posted by MYoung23 on May 6th, 2010 @ 7:46am CDT
I find it very ironic that the reason we were given for crappy movie-verse aesthetics like wheel feet, chicken legs, and whatever that bee thing was in ROTF was to make the Transformers look "alien" but yet we now have a robot scorpion, gorilla, rhino and two birds...

As the 'official' continuation of the movieverse, it is...faily. Ummm, post-ROTF, Epps is a Master Sergeant. Furman makes him a sergeant. It's REALLY unlikely that anyone would have THAT kind of reduction in grade rather than just a complete discharge from the Air Force.

WAAAAYYY too many humans and the cutesy-wootsy 'oh look let's be all gender diverse' and stuff is complete fail. The semi-goth chick computer expert? Wow, is Furman really stooping to rip off NCIS?!?!

The art on the bots doesn't bother me, though as MYoung has said...making robots look like animals when the whole movieverse schtick was that, for once, they looked and acted *alien* is a bit irksome to me.

The humans...whoa. They all seem to have some kind of skin condition.

I'm really not digging this series. Too many maguffins for one: how do they have a replicated Allspark when Starscream couldn't succeed in a rebuild? Anyone other than Furman, I'd expect that to be, you know, explained or accounted for.

I'm having serious squee heart ness for Wreckers, so the complete FAIL of this for me only evens things out.

In the end it's a complete waste of what the movieverse continuity should or could be. I've read better fanfic than this.

HK, wishes they'd bring Mowry back. srsly.
Re: TRANFORMERS: Nefarious #3- In Stores Tomorrow, reviewed here! (1072714)
Posted by MYoung23 on May 10th, 2010 @ 12:30am CDT
I think the difference between the attempts of Starscream and the Initiative is that Starscream just tried to chisel another All Spark and infuse it with the energon from Transformers. The Initiative is using real All Spark fragments to get theirs working.