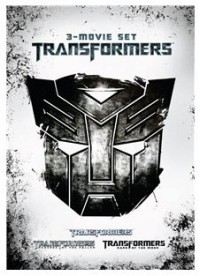 The UK's Play.com has listed a pre-order for a Transformers 1-3 DVD Box Set featuring a previously unseen package art. The set is listed for £24.99 and scheduled for release November 28th. The listing notes the artwork is subject to change.

Transformers: Their war, our world...

Dueling alien races, the Autobots and the Decepticons, bring their battle to Earth, leaving the future of humankind hanging in the balance.

Transformers 2: Revenge Of The Fallen: When Sam's college experience sours amidst nerdy roommates (Ramon Rodriguez), sexy stalkers (Isabel Lucas) and strange, unexplainable visions, he seeks to understand what the Decepticons know only too well. A normal life will have to wait, because an ancient enemy is on its way to destroy Earth! Can Sam, Optimus and co. save the day in the ultimate battle of good vs. evil?

Transformers 3: Dark Of The Moon: The Autobots learn of a Cybertronian spacecraft hidden on the Moon, and race against the Decepticons to reach it and learn its secrets, which could turn the tide in the Transformers' final battle.

Region 2 - Will only play on European Region 2 or multi-region DVD players.