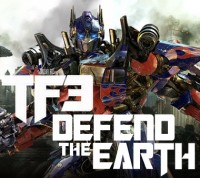 Seibertron.com reader Norman A. wrote in to let us know about a new iOS (iPhone, iPod Touch, iPad) game from Paramount Digital. You can obtain this free app by downloading it directly from Apple. The game does require the user to take a photo of a Transformers 3 movie poster, featuring Optimus Prime in order to "activate", so early iPod Touch users without a camera may be out of luck. There's no word yet if an Android version is in the works, but we'll keep you posted if it is released.

Seibertron.com is your ultimate Transformers Dark of the Moon resource!

Nightwalker wrote:I downloaded this app. But I can't put it on my iPhome for some reason

Can anyone please help me?

Never mind, figured it out

in fact the app can be downloaded and played from any location in the world! you just need to point at the poster at any IMAX around the world to play it, and it also unlocks a 360o AR game,

....OR, PRINT out the poster from this official link:

"US Only" is only for the location list of IMAX theaters where the movies is playing in the States, also the location of the huge posters the Augmented Reality (AR) poster game works from. It doesn't mean the game/experience is only available in the US.

The poster print needs some white space around it for the AR tracking to work and I've found the bigger i print it, the better the experience. I just stuck it to a wall and voila! awesome game experience. It's like looking through a window into downtown Chicago. If you look from an angle you can even see Optimus Prime's arm dangling out of the 'window' before you click "Defend" to start the game.
Awesome.

To aim I found it best if I physically moved around, left and right in front of the poster. I wouldn't get hit if i kept moving, and by moving around i could center the cross hairs on my targets.

After you experience the poster game, it unlocks the 360o AR game, in which Decepticon Fighters are flying all around your head. its very cool. I found it ran really well on my iPhone 4, but the experience was amazing on my iPad2

REMEMBER to hit "SCAN" on the "Experience" page to activate your camera and the AR experience to view and play the game within poster.