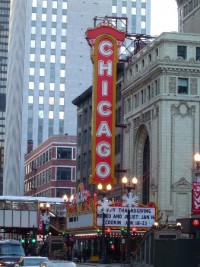 It appears that there is still more filming to do in Chicago for Transformers 3. In this article from Chicago Breaking News, they report that more filming will be occurring this weekend.

Don't worry if you see explosions, smoke and fireballs in the Loop this weekend -- it's not a new crime wave, it's the latest installment of Hollywood in Chicago.

And anyways I don´t think they fired Megan, it´s like the first rumors we´ve gotten, they said they killed her off, and just appears the first minutes, that´s what I´m guessing, same thing happened with ROTF

Re: Transformers 3 More Filming in Chicago (1115111)
Posted by TFIta369 on August 19th, 2010 @ 12:56pm CDT
Even though evreyone(just Tyrese and Mike) have ben saying, remember the bay campaign...
Re: Transformers 3 More Filming in Chicago (1115333)
Posted by Boltrider on August 20th, 2010 @ 12:00am CDT
My thoughts on the next movie are these:
1). The fire truck is Inferno, the crane is Grapple.
2). Bumblebee is fatally wounded , then reformated into Goldbug.
3). Carly is a friend of Mikaela. Mikaela is killed in an auto accident and the romantic spark is kindled between Carly and Sam.
4). Prime is introduced with trailer. Trailer opens to show military style ops post.
5). Starscream and Megs go at it on the skyscrapers of Chicago. Starscream shoots Megatron with a missile and his null ray. Megatron, after being practically blown to bits by Prime and Ironhide, zaps Starcream and watches him disintegrate , just as in '86.
6. Motormaster, is an oil tanker in this film.
7. Trypticon is hidden in the Sears Tower.

. The final artifact to be found is the Key to Vector Sigma. Rodimus might well be the "guardian" of this key, then again Alpha Trion might also hold that designation.
If you believe 100% of what I just said, I have a bridge to sell you in Halifax, but I do believe some of this could be actual footage.
Re: Transformers 3 More Filming in Chicago (1115386)
Posted by G1 Smoketreader on August 20th, 2010 @ 5:35am CDT

Boltrider wrote:My thoughts on the next movie are these:

3). Carly is a friend of Mikaela. Mikaela is killed in an auto accident and the romantic spark is kindled between Carly and Sam.


I like that idea.
Giving Mikaela to Carly as a friend is a good and long lasting way for a requiem to Mikaela (assuming she does die).
Also, assuming Sam and Carly marry, Mikaela's memory and contribution to the robot war would then remain as an honored binding component within the family unit, considering Mikaela physically pitched in to help swing the battle more than once, without real hesitation or consideration to the level of danger she'd remain in by not running to a safer place.

The married pair could then even be taken so far as to name one of their children after her.Very effective groundwork for any sort of 'next generation' movieverse that could appear someday.
Re: Transformers 3 More Filming in Chicago (1115740)
Posted by Boltrider on August 20th, 2010 @ 9:45pm CDT
All I am really hoping is that new, cool characters are introduced, the story has somewhere to go and all the untied ends will actually make since. For one, why were Starscream and Megs left alive at the end of ROTF? Prime could have done more than mop the deck with Megs. Now he's got possibly a newly rebuilt Mr. Crabs ( errr, Megatron) and a super sneaky Starscream to deal with. It all has to end in a big city for sure, but lets hope that there's something REALLY BIG to end it all with.