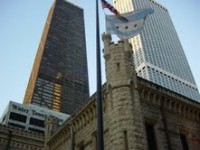 Let's face it - good economic news is never a bad thing and when it comes packaged with Transformers it can only get better, right?

Well, due to the people behind Transformers 3 choosing the city as one of its filming locations, the city of Chicago is slated to receive an economic boost.

Here's some info courtesy of an article from the Chicago Sun-Times.

“Transformers 3” — the sci-fi action thriller filming in Chicago this summer — will pump $20 million into the local economy and create 200 jobs, including ten internships for inner-city students, Mayor Daley said today.

Joking about landing a walk-on roll, Daley welcomed producer Lorenzo Di Bonaventura to Chicago 30 years after the premiere of the landmark film, “The Blues Brothers.”

“Transformers 3” is scheduled to open in late June or early July of next year. It will film in Chicago from July 10 until Aug. 19.

Then-Mayor Jane M. Byrne, Daley’s political nemesis, took a lot of heat for allowing a car to crash into the Daley Center during the filming of “The Blues Brothers.”

“Transformers 3” is certain to include even more scenes of death and destruction on the streets of Chicago.

“You’re gonna see a little bit of mayhem. You know, I mean it wouldn’t be ‘Transformers’ without it,” Di Bonaventura said.

You may read the rest of the article by clicking here.

It probably won't do much good long term.
Oh sure it puts some money back into the economy now. But in the long run a good amount of that will end up back in their hands through ticket sales.

Also this is only going to really help the economy, in Chicago. 20 million is a paltry sum compared to how much debt the country is in. And that pitiful 200 jobs they're talking about are only going to be temporary.

And you know what. I'm actually appalled that they would try to pander to people by saying they're helping our economy, desperately hoping it will make people feel like seeing this movie, regardless of the economy's condition.

Well, I'd better stop there. As to avoid ticking off what few people I haven't angered already.

Lastjustice wrote:They'll trick bay into thinking he caused all the pot holes and make him pay for em hehe.

That would work, but Michael Bay would say it couldn't have been him, because his pot holes would be three times bigger, have fireworks coming out of them while a rock band plays and an American flag waves in the background.
Re: 'Transformers 3' to bring $20 million, 200 jobs to Chicago (1089940)
Posted by Hip-Hoptimus Rime on June 24th, 2010 @ 10:50am CDT
I took the liberty of mapping out these street closures and times, see attached:

I have no idea how close I'll be able to get to the filming- I've read that security will be tight. I'll be there at least a couple times on the weekends, tho.