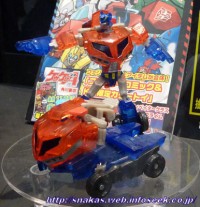 In the latest issue of Japanese montly comic magazine - Kero Kero Ace, it has been reported that the upcoming release of Transformers Animated comic - The Cool Special Edition. This special edition of comic will comes with an exclusive toy - Transformers Animated Activator Clear Optimus Prime. i would love to see how they do TFA compared to how i drew the IDW comics... and i SOOOO NEED that OptimusPrime Figure - "CoolPrime"