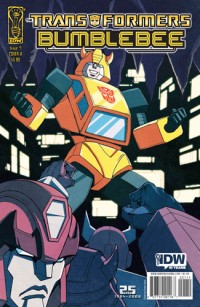 The yellow star of Transformers, Bumblebee, now has a comic series named after him. IDW kicks off Transformers - Bumblebee #1 on December 16th. Thanks to Previews and the watchful eye of Energon Pub member minimus-minor, we get a six page preview of the brand new series. You can check out the description, a cover and an excerpt below... In this first-ever Bumblebee miniseries written by Zander Cannon (Top Ten), it's a shakeup in Autobot leadership! Bumblebee finds himself leading a group that believes him to be unprepared for the job. An opportunity to radically improve the Autobots reputation arises. Bumblebee accepts the challenge despite his reservations, and embarks on a clandestine mission for the human military to find and disable all remaining rogue robots. ...while the rest can be seen at your own discretion here.

Keep it tuned to Seibertron.com for the fastest Transformers news on the net!

I also am very happy to see that Bumblebee has his traditional body style back. I was never a fan of the IDW body for him. I also like seeing Bumblebee with his optimistic and cheerful personality gracing the cover. Don's new art style totally throws this trait of his out the window.
Re: Transformers - Bumblebee #1 Six-Page Preview (1027926)
Posted by Seibertron on December 14th, 2009 @ 5:17pm CST
Not sure who the artist is. Chee & Trevor Hutchison ... is one guy the inker and the other the penciler?

To be honest, I'm in love with this art style. For some reason, it reminds me of the "Man of Iron" two parter from the old school Marvel comics, but the art style looks nothing like it. Just looks serious without looking crazy ridiculous like Figueroa's style in Ongoing.

Heck, this artist can even draw people and not draw them like a Transformers artist drawing people if you know what I mean.

My only nitpicks with this are ...

1. Blue lighted side panels on Wheeljack please! Not orangish-red. He's an Autobot!

2. Something's not quite right with Bumblebee's face in the 1st panel on the 2nd page of this preview.

3. Something's not right with Bumblebee's face in the 5th panel on the 6th page of this preview.

Re: Transformers - Bumblebee #1 Six-Page Preview (1027984)
Posted by Ultra Magnus on December 14th, 2009 @ 8:15pm CST
As the lone Don supporter in this thread, I will state that this art style is really cool. In comparison with Don's designs, this is very "retro"; reminds me of the Marvel "Big Looker" books that originally furthered my interest in Transformers. With that in mind, I'd say this "Retro" style makes for a sensible alternative to those out there that feel so "Deeply and Personally Betrayed"(

) by Don's infinitely more intricate and detailed designs. I am a lot more partial to actual working transformations than the classic cartoon look, so that is the only complaint I have about this art style overall.

Anyway, this book looks to be very cool and also looks to tell an equally interesting story. I think the art style is perfect for this feature on Bumblebee. And though I never really thought I'd ever see him actually become the Leader of the Autobots, I'm down with it. Let's see where this goes!

Re: Transformers - Bumblebee #1 Six-Page Preview (1028029)
Posted by NuclearConvoy on December 14th, 2009 @ 10:51pm CST
What I like most about this comic is that it shows, very clearly, that as far as IDW is concerned, Don's style on the main title is the way HE draws these characters. I think, from what I can see, that the DESIGNS are congruent with those Don is using, as far as overall structure and arrangement go, but the facial and fiddly detail aesthetics are more familiar.
Re: Transformers - Bumblebee #1 Six-Page Preview (1028038)
Posted by Down_Shift on December 15th, 2009 @ 12:23am CST
I'll be honest, I think it looks brutal.

I'll still buy it because I'm hoping the story is good, but I don't care for the art. Mind you it's better then some of the past comic art. I think my problem with it is that it looks too Wildman to me. I still can't forgive him for ruining Dark Ages.
Re: Transformers - Bumblebee #1 Six-Page Preview (1028052)
Posted by minimus-minor on December 15th, 2009 @ 1:38am CST

Seibertron wrote:Not sure who the artist is. Chee & Trevor Hutchison ... is one guy the inker and the other the penciler?

In response, here's the complete creative team: Written by Zander Cannon, Art by Chee, Colors by Moose Baumann, covers by Chee and Guido Guidi. Not sure of the letterer, looks like Neil Uyetake.
Re: Transformers - Bumblebee #1 Six-Page Preview (1028079)
Posted by Starscream6 on December 15th, 2009 @ 5:47am CST
ugh! ill buy the series for the story but im not a fan of the artwork, at all.

IMO, dons new work is light years ahead of this....and im not even completely sold on it yet!

this just looks sooooo amateur.
Re: Transformers - Bumblebee #1 Six-Page Preview (1028168)
Posted by Dead Metal on December 15th, 2009 @ 12:08pm CST
I've always hated Bumblebee's G1 toon body I much preferred the cool idw one EJ Sue designed.
Re: Transformers - Bumblebee #1 Six-Page Preview (1028200)
Posted by dragons on December 15th, 2009 @ 2:19pm CST
i like where the series is going buti dont like the faces its something i can get used in the animated series but for comics its doesnt macth up this time line anymore feels to me im reading the orginal 80s comics all over again with updated art, & new story to humanized faces to me robotic faces looked better they looked more robtic like this looks like gijoe who transfrom.

As the lone Don supporter in this thread, I will state that this art style is really cool.

hey hey hey now I have been supporting Don for a while now...lol I love the new look and direction, I just got tired of arguing to those who don't like anything but classic G1 desgins.

Different strokes for different folks.....this series look ok, but bumblebee is my least fave autobot, and bee as a leader, epic fail for me. The only incarnation of BB I really got into was TFA bumblebee...
Re: Transformers - Bumblebee #1 Six-Page Preview (1028354)
Posted by JazZeke on December 15th, 2009 @ 11:20pm CST
The artwork is just okay, I really have no complaints about the retro aesthetic of it. I just wish the editors cared enough to make sure artists draw characters with the same consistent body when two comics are set in the same time frame. Otherwise it's a HUGE continuity gaffe that exists only because of an artist's personal preference. Say what you will about preference, I just want consistency. And that's my biggest beef with IDW right now.
Click here to view additional comments about this topic at the Energon Pub Forums ...