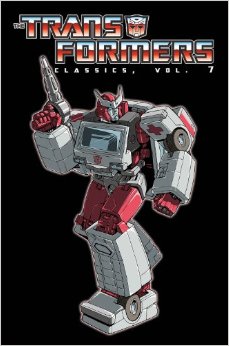 Online retailer Amazon.com has updated its listing for the Transformers Classics volume 7 that we reported on a while back with a cover image featuring Ratchet, and added two new listings: Dark Cybertron Volume 2 and Transformers: Movie Collection Volume 2! The former is priced at $15.31 and due for release on June 24th, while the latter show a price of $21.02 and a release date of July 8th - check out more details and covers below!

The historic roots of The Transformers are re-presented for maximum Cybertronian enjoyment! Collects issues #77-80, the Headmasters four-issue series, and the three-issue Movie Adaptation. Freshly re-mastered and re-colored, these stories are accompanied by an in-depth introduction as well as select issue notes by Mark W. Bellomo.


The conclusion to the 12-part epic Dark Cybertron! Ultra Magnus leads what's left of the Lost Light crew, while on Cybertron, titans clash and the ultimate battle will leave the planet changed forever!

Let's not even get started on Blitzwing.

Sabrblade wrote:All that's left are the Universe profiles which, if not in this volume, will be in Volume 8!

Will it be the profiles from the old 80s comics? The ones that had them all in the same position in robot mode with the vehicle modes underneath? And will it be the entire set of profiles? I hope so, I never did get all of those together. I have some of them, but I am missing some I know I used to have as a kid and lost over the years.