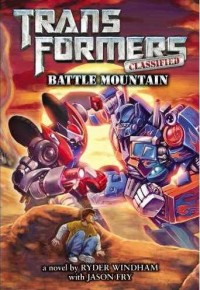 In this follow-up novel to Switching Gears, 12-year-old Kevin Bowman is now working with the Autobots to fight the evil Decepticons and search for his missing brother. Kevin is starting to lose hope until he gets help from the most unexpected person-his nemesis, Douglas. Douglas informs the team of a secret cave of ancient Cybertronian weapons located at Battle Mountain, Nevada. Kevin and Gears believe the cave might have clues to the disappearance of Kevin's brother and other missing soldiers. Will the team find what they are looking for or has Douglas set a trap for them at Battle Mountain?

About the Author
Ryder Windham is the author of over sixty books, including many Star Wars and Indiana Jones titles. He teaches classes on comic art and storytelling at Rhode Island School of Design Continuing Education. He resides with his family in Providence, Rhode Island.

Jason Fry is a writer, an editor, and a digital journalism consultant. He is the author of the New York Times bestselling Star Wars: The Clone Wars: The Visual Guide and more than a dozen other Star Wars books. He lives in Brooklyn, New York, with his wife and son.

Hasbro, Inc. is a branded play company providing children and families around the world with a wide-range of immersive entertainment offerings based on the Company's world class brand portfolio. From toys and games, to television programming, motion pictures, video games and a comprehensive licensing program, Hasbro strives to delight its customers through the strategic leveraging of well-known and beloved brands such as TRANSFORMERS, LITTLEST PET SHOP, NERF, PLAYSKOOL, MY LITTLE PONY, G.I. JOE, MAGIC: THE GATHERING and MONOPOLY.

I was thinking the same thing

And Optimus Prime VS Reverb (who I'm pretty sure has died twice now) has to be one of the most one sided fights I have seen in a long time.