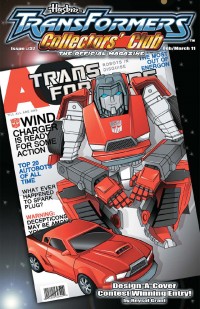 Here're some highlights from this issue:

* "Design-A-Cover" contest winning entry by Reysol Grant, which features Reveal The Shield Windcharger.
* Brian's Bytes and Bolts reveals the Animated theme for BotCon 2011, which would have been huge news except for last week's leaks. He also reminds us to keep our membership current so that we can receive our free membership Side Burn figure. Also mentions that Ramjet and Cheetor will be shipping with the BotCon toys so we should expect preorders soon.
* G1 Interview with Neil Ross
* Interview with Hasbro Designer Bill Rawley - who reveals he wants a shot at Wheelie and more!
* Bios for Landshark and G1 Starscream (Cybertronian tetra jet)
* Results for this fall's TCC Contests
* Battle Lines (Part 1) comic which features Side Burn
* Transformers Comic Spotlight: Hearts of Darkness (interview with Andy Schmidt)
* The Back Cover finishes off with Around Cybertron, featured fan art, and Recordicons three alternate heads were created, no names were revealed, and there are no current plans to release them.