Today the Diamond Exclusive Botcon 2006 "Transformers Timelines: Dawn of Futures Past" comic was released. One of the pages in the comic featured an advertisement for Transformers Collectors Club membership. Featured in the advertisement are images of the box for the upcoming club exclusive Astrotrain, the mini-cons that will be included with Astrotrain, a close up of his headsculpt and the next club exclusive!

The figure will be Dawn of Futures Past Airazor. A photo of Airazor's headsculpt is featured in the advertisement. Airazor appears in the comic and is clearly a repaint Energon Slugslinger with a totally new headsculpt. You can see a scan of the advert here at TFW2005.

Update: Thanks to Fireblast we now have a comfirmation scan from the comic book itself for Airazors mould. 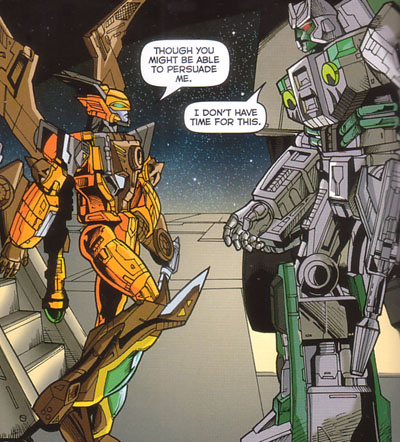