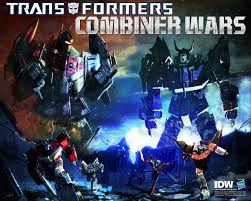 The Combiner Wars may just be getting started but Amazon has a pre-order for those who like their comics in collected Trade Paperback form. Transformers: Combiner Wars collects issues #39-41 of Transformers as well as the first three issues of Transformers: Windblade-Combiner Wars. This Trade is 152 pages has a scheduled release date of August 25, 2015. There is currently no cover image available.

Flashwave wrote:So, funny thing happened to me as I'm organizing my stack of comics: In the Dark Cybertron introduction to the Fembots, Chromia and Magnus are discussing the former's run in with Trion... and Chromia's words are "He was being enigmatic and I wanted to lampshade him." I realize this is not that far from when they were writing Dark Cybertron, but does anyone else find these writers frightening how far out they plan these things?

To be fair, Alpha Trion is nothing if not enigmatic, always off on his own with an agenda that Primus only knows.

Still, it's entirely possible. Chaos Theory is still playing out to this day.
Re: Transformers: Combiner Wars Trade Paperback Amazon Pre-Order (1664049)
Posted by Va'al on March 18th, 2015 @ 7:49am CDT
Swindle Me This
(Spoiler free-ish)

Synopsis
OPENING SALVO! The Autobots and Decepticons’ uneasy peace is threatened by the flames of war! STARSCREAM—ruler of CYBERTRON—makes contact with WINDBLADE’S homeworld—and the only defense against a new CYBERTRONIAN EMPIRE are COMBINERS—multiple CYBERTRONIANS forming together into huge, dangerous forms!

Story
Days of Deception is over, Windblade was over a long time ago, Punishment saw both its digital and print run, and we have been really setting the stage for Combiner Wars for a long long time now. And yet, The Transformers #39 takes another small step, piecing together the various parts leading up to here, preparing the spark, the casus belli, if you will and giving it all just a gentle prod.

John Barber takes main writing duties for the issues, but both him and Mairghread Scott are palpably present in the plotting of story. The dialogue provides a great framework of power dynamics and hierarchy being subverted at every turn, with some further development for a lot of older faces - and Swindle, of all characters, whose perspective guides the story.

We have Windblade and Optimus and some intriguingly almost 'post-colonial' moments of perspective shifts; we get Wheeljack and Ironhide and Chromia just trying to do their jobs, and being almost entirely confused; we get Starscream being Starscream, and gloriously so; we are introduced to Offroad, and given a *fantastic* explanation for their presence; we get another addition to the chapter in Transformers fiction that is Alpha Bravo, and Powerglide.

As an introduction, the Opening Salvo of Combiner Wars does much more than wht it could've,and is an immensely enjoyable read, with good humour, a good establishing of the playing field and just enough references to older continuity points to keep older fans entertained while bringing in some new ones too. Kapoom.

Livio Ramondelli, as we knew, takes on the whole brunt of the artistic duties for this and the majority. And I have to unfortunately admit this time, we are not seeing the great work he provided in recent publications such as Punishment. The composition is great, and there are really good layouts in the issue, and some of the expressivity is well conveyed.

At other times, however, some of those same faces, especially the newer or less frequently used ones, fall a little short of the full enjoyment of the piece. The tone is captured, and the washed-up, grimy sense of a post everything Cybertron works well - as might Caminus - but sometimes it really does jar a little.

The lettering does work quite well, even so, and Tom B. Long demonstrates once more the craft of a good letterer in some great sound effects and speech modifications. And While we have seen the beautiful Casey Coller/Joana Lafuente regular Menasor cover, and Ramondelli's poster variant for B, the gem of the variants is undoubtedly Sara Pitre-Durocher's Menasor and Swindle - see the thumbnail!

Being able to follow what is going on on Cybertron from Swindle's perspective is, in and of itself, a treat. Seeing the world how he sees it and through those purple eyes, with the cynicism, degrees of naivete and, well, Swindle attitude, is truly refreshing. We get all of that, plus some very good interactions, and a great cameo from the Lost Light, too.

If this what we are to expect from the crossover event, and the merging of Barber and Scott's plotting minds, then we're certainly in for a fun trip down six or so issues. Combiner Wars is playing on multiple angles without, so far, reaching too far out to be forced to justify the number of players, has a healthy dose of Swindle and Starscream, and is suitable for anyone under or over the age of Galvatron.

Re: Transformers: Combiner Wars Trade Paperback Amazon Pre-Order (1664071)
Posted by Randomhero on March 18th, 2015 @ 10:17am CDT
Good solid issue! I enjoyed it a lot. Only gripe was art, always enjoyed Livio in the past but as time goes on I see what other see. Everything is very flat, no depth and the awful photoshop filtered landscapes. Still rather have him on than Pat or Don ever again though
Re: Transformers: Combiner Wars Trade Paperback Amazon Pre-Order (1664098)
Posted by budmaloney on March 18th, 2015 @ 11:16am CDT
I liked this issue. We finally get to see Caminus. The art was ok, it's dark and I think it is suitable for the CW intro. I just felt things were moving a bit too fast. And lots of narration and retelling of old events. I know it's retelling for the new readers, but perhaps this issue should have been stand alone along side RID and MTME. So hopefully #2 should be next week?
Re: Transformers: Combiner Wars Trade Paperback Amazon Pre-Order (1664104)
Posted by ScottyP on March 18th, 2015 @ 12:03pm CDT
I thought this issue was a lot of fun. Felt lighthearted somehow, even with some of the doom and gloom about. Swindle being the focal point of the narrative was great, he's just so Swindle in this issue.

The explanations for some of the toy characters are spot on, as in, hey let's not take this so seriously and tell a cool, fun story. Definitely on board with what they're doing.

GuyIncognito wrote:Is Swindle a mini-con now? Why is he so tiny on the cover?

Well, he was always a bit shorter than others to my recollection, but there's also a generous amount of mass-shifting going on for combiners to be as big as they are. Otherwise you either get combiners barely bigger than regular big bots or individual members being ridiculously big compared to their leaders.
Re: Transformers: Combiner Wars Trade Paperback Amazon Pre-Order (1664278)
Posted by D-Maximal_Primal on March 18th, 2015 @ 10:38pm CDT
I really like the fact that they made Menasor, the 1-time failed experiment of Swindle's the first offender of Combiner wars. With The engimna, I expect Superion will be up shortly and ready to rock. Also really like how Rodimus sends a shuttle with Lost Light delegates, and I bet we all know who will be on that shuttle don't we?
Just wonder if First Aid will be on that shuttle or not, considering the toy still has him a part of Defensor.
Also, considering Starscream has pulled Swindle back to his old tricks, I wonder if that means Swindle will eventually become part of one, wink wink.
Finally a question: I heard a while back in an interview that someone will be returning. Could Scrapper be resurrected to form a new Devastator and Prowl be transferred to Ultra Prime as a limb?
Re: Transformers: Combiner Wars Trade Paperback Amazon Pre-Order (1664312)
Posted by ZeroWolf on March 19th, 2015 @ 2:18am CDT

D-Maximus_Prime wrote:I really like the fact that they made Menasor, the 1-time failed experiment of Swindle's the first offender of Combiner wars. With The engimna, I expect Superion will be up shortly and ready to rock. Also really like how Rodimus sends a shuttle with Lost Light delegates, and I bet we all know who will be on that shuttle don't we?
Just wonder if First Aid will be on that shuttle or not, considering the toy still has him a part of Defensor.
Also, considering Starscream has pulled Swindle back to his old tricks, I wonder if that means Swindle will eventually become part of one, wink wink.
Finally a question: I heard a while back in an interview that someone will be returning. Could Scrapper be resurrected to form a new Devastator and Prowl be transferred to Ultra Prime as a limb?

I doubt it somewhat as solitcs for future issues reveal that First Aid is indeed with the protectorbots (along with a couple of others like Cyclonus), and prowl...yeah he's not combining with prime anytime soon and it's more likely that bumblebee will be resurrected.

Re: Transformers: Combiner Wars Trade Paperback Amazon Pre-Order (1664365)
Posted by Umbra on March 19th, 2015 @ 9:02am CDT
I liked the cameo by Rodimus, Ultra Magnus, and Megs and it would only make sense story wise that they send the protectobots as their representatives, as I think all of them are on the Lost Light, though it doesn't seem wise to be that they would give up their chief medical officer in training. Given the size they've portrayed Swindle at, I wonder if we might seem him downgraded in size, and be a legends class like Groove, with a new bot taking a limb position.
Re: Transformers: Combiner Wars Trade Paperback Amazon Pre-Order (1664433)
Posted by padfoo on March 19th, 2015 @ 2:17pm CDT
I cant wait to read the whole Combiner wars saga, pretty interesting lead up so far.
Re: Transformers: Combiner Wars Trade Paperback Amazon Pre-Order (1665527)
Posted by SW's SilverHammer on March 22nd, 2015 @ 3:40pm CDT
Today; I tunes issued a 3 page preview for Windblade Volume 2 #1. This issue is part of the combiner wars crossover, and takes place directly after The Transformers (formerly Robots in disguise) #39: Opening Salvo. Windblade volume: 2 Issue 1 is scheduled for release on 03/25/15. 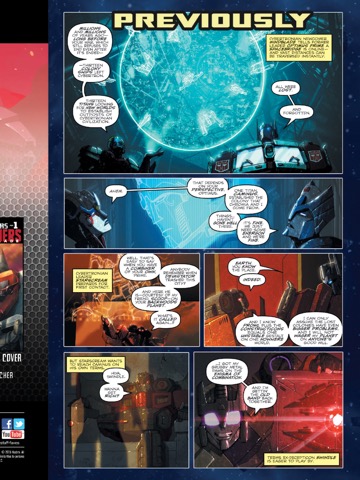 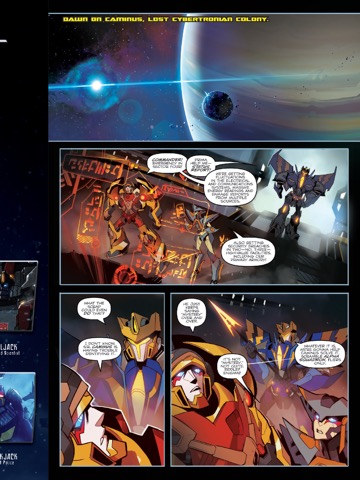 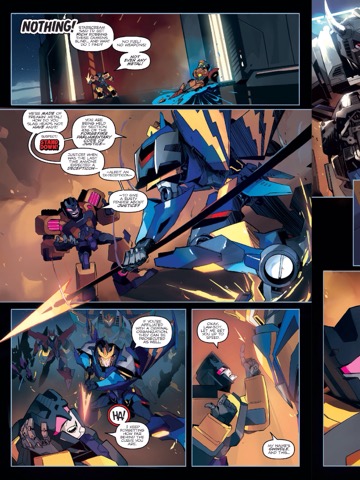 ZeroWolf wrote:Surely you mean issue 39 :p things are starting to heat up

though I wish these previews went a little bit further
Re: Transformers: Combiner Wars Trade Paperback Amazon Pre-Order (1665741)
Posted by Va'al on March 23rd, 2015 @ 4:52am CDT
The next chapter in the IDW Transformers crossover event between the Transformers ongoing and the return of Windblade in an all-new series has been previewed by iTunes in the usual short short sneak peek - and mirrored below thanks to a tip from Seibertronian SW's Silverhammer; check them out!

THE WAR BEGINS! The first strike in COMBINER WARS is against WINDBLADE’S homeworld—and she’s not happy about it! Her long- lost CYBERTRONIAN colony is found… and the only thing that can protect it is SUPERION.

Re: Transformers: Combiner Wars Trade Paperback Amazon Pre-Order (1665753)
Posted by ZeroWolf on March 23rd, 2015 @ 5:48am CDT
I wonder, is that a new body for Swindle?
Click here to view additional comments about this topic at the Energon Pub Forums ...