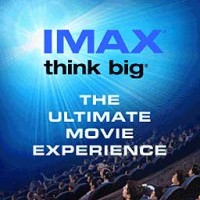 Transformers: Dark of the Moon continues to break records and drain wallets. Financial analysis site The Motley Fool is reporting that Michael Bay's third live action movie, and the first filmed specifically for IMAX 3D has made a massive impact in that niche.

The Motley Fool wrote:IMAX showings generated $23.1 million in global ticket sales over the holiday weekend, ringing up $14 million domestically through 146 screens and an additional $9.1 million on 105 international locations.


This comes just over a week after the film's record breaking holiday launch and impressive global earnings.

Seibertron.com is your ultimate Dark of the Moon resource!

But enough about the wizard, we've got our own impressive numbers to talk about! Transformers Dark of the Moon raked in another $21.5 million over the weekend, and became the first film of 2011 to cross the $300 million mark. After only 19 days Transformers Dark of the Moon has earned $302.8 million domestically and $460 million in foreign markets for a total of $762.8 million.

Cyber_Tek wrote:Wow. It's bound to crack a billion. The studio must be bonkers over the revenue. By the way, wasn't it supposed to be the last Hairy Potter movie a couple of movies back?

Cyber_Tek wrote:Oh. Well that explains it. I haven't gone to see any of the Hairy Potter movies past the first. SHRUG.

They're good films, and I would have probably went to watch this weekend along with everyone else had I not missed a couple of the previous Potter films. I borrowed all of them on blu-ray from my in-laws to watch over the week so I can see it this weekend.
Re: Transformers Dark of the Moon Generates Record IMAX Earnings (1261589)
Posted by prowl123 on July 18th, 2011 @ 4:10pm CDT

CrimsonPrime wrote:DOTM is great. Okay what I wanted to say is actually...Why does people still dont realize this yet? G1 = Good to the fans BUT sucky to the teenagers. Let's face that shall we? Okay stop calling them stupid. With the current line of animes,cartoons,movies,dramas and TV shows it only makes sense that they hate G1. G1 was like 6-8 years before they were born for crying out f**k -.-...Look I know G1 started it all kay...I know if there were no G1 there will be no live-action I get it...BUT !! NOT EVERYONE IN THE WORLD KNOWS THAT OKAY!? So stop fcking dissing you dumbass geeks -_-...

I'm a teenager and I love G1. I was pissed that I missed the marathon yesterday.

LOS ANGELES, July 25, 2011 (GLOBE NEWSWIRE) -- IMAX Corporation (NYSE:IMAX) (TSX:IMX), and Paramount Pictures announced today that Transformers: Dark of the Moon, the highly anticipated third film in the blockbuster Transformers franchise, surged to an IMAX opening launch record for a U.S. movie in The People's Republic of China, garnering approximately $3.7 million on 31 screens over the four-day opening, for a per-screen average of $120,000. This represents IMAX's widest release in China to date, and surpasses the previous IMAX opening weekend record of $97,400 per screen for Avatar.

Since its launch on June 29, Transformers: Dark of the Moon has grossed $45.5 million globally in IMAX® theatres, surpassing the $44 million of gross box office generated by Transformers: Revenge of the Fallen:The IMAX Experience. The film will open in Japan this coming weekend. Globally, the film has generated total box office of $882 million to date.

"We're extremely pleased with such record results for an IMAX DMR film in China," said IMAX CEO Richard L. Gelfond. "Chinese audiences are clearly seeking out The IMAX Experience® through U.S. blockbusters and numbers like these illustrate why China presents an exciting – and growing – opportunity for IMAX. By year-end, we anticipate having 85 theatres operating in Greater China, more than double the 40 theatres we had open at the end of 2010."

"These fantastic box office results are a testament to all of our great partners in China," said Greg Foster, IMAX Chairman and President of Filmed Entertainment. "In addition, Michael Bay and Paramount Pictures have delivered a fan favorite and moviegoers around the world continue to come out in force to see this latest installment of the Transformers franchise in IMAX."

Transformers: Dark of the Moon: An IMAX 3D Experience has been digitally re-mastered into the image and sound quality of The IMAX Experience® with proprietary IMAX DMR® (Digital Re-mastering) technology for presentation in IMAX 3D. The crystal-clear images, coupled with IMAX's customized theatre geometry and powerful digital audio, create a unique immersive environment that will make audiences feel as if they are in the movie.

About Transformers: Dark of the Moon

Shia LaBeouf returns as Sam Witwicky in Transformers: Dark of the Moon. When a mysterious event from Earth's past erupts into the present day it threatens to bring a war to Earth so big that the Transformers alone will not be able to save us.

Transformers: Dark of the Moon is the third film in the Transformers franchise and the first shot in 3D. It is directed by Michael Bay, written by Ehren Kruger and produced by Don Murphy & Tom DeSanto, Lorenzo di Bonaventura and Ian Bryce. The executive producers are Steven Spielberg, Michael Bay, Brian Goldner and Mark Vahradian. The film has been rated PG-13.

HASBRO, TRANSFORMERS and all related characters are trademarks of Hasbro.

IMAX China is a wholly-owned subsidiary of IMAX Corporation, and is incorporated under the laws of Hong Kong. IMAX China was established by IMAX Corporation specifically to oversee the expansion of IMAX's business throughout Greater China.

IMAX Corporation is one of the world's leading entertainment and technology companies, specializing in the creation and delivery of premium, awe-inspiring entertainment experiences. With a growing suite of cutting-edge motion picture and sound technologies, and a globally recognized entertainment brand, IMAX is singularly situated at the convergence of the entertainment industry, innovation and the digital media world. The industry's top filmmakers and studios are utilizing IMAX theatres to connect with audiences in extraordinary ways, and as such, the IMAX network is among the most important and successful theatrical distribution platforms for major event films around the globe. The Company's new digital projection and sound systems - combined with a growing blockbuster film slate - are fueling the rapid expansion of the IMAX network in established markets such as North America, Western Europe, and Japan, as well as emerging markets such as China and Russia. IMAX theatres deliver the world's best cinematic presentations using proprietary IMAX®, IMAX 3D®, and IMAX DMR® (Digital Re-Mastering) technologies. IMAX DMR enables virtually any motion picture to be transformed into the unparalleled image and sound quality of The IMAX Experience®.

IMAX is headquartered in New York, Toronto and Los Angeles, with offices in London, Tokyo and Shanghai. As of March 31, 2011, there were 528 IMAX theatres (408 commercial, 120 institutional) operating in 46 countries.

IMAX®, IMAX® 3D, IMAX DMR®, Experience It In IMAX®, An IMAX 3D Experience® and The IMAX Experience® are trademarks of IMAX Corporation. More information about the Company can be found at http://www.imax.com. You may also connect with IMAX on Facebook ( http://www.facebook.com/imax ), Twitter ( http://www.twitter.com/imax ) and YouTube ( http://www.youtube.com/imaxmovies ).

The IMAX Corporation logo is available at http://www.globenewswire.com/newsroom/prs/?pkgid=6469

This press release contains forward looking statements that are based on IMAX management's assumptions and existing information and involve certain risks and uncertainties which could cause actual results to differ materially from future results expressed or implied by such forward looking statements. Important factors that could affect these statements include, but are not limited to, general economic, market or business conditions, including the length and severity of the current economic downturn, the opportunities that may be presented to and pursued by IMAX, the performance of IMAX DMR films, conditions in the in-home and out-of home entertainment industries, the signing of theatre system agreements, changes and developments in the commercial exhibition industry, the failure to convert theatre system backlog into revenue, new business initiatives, investments and operations in foreign jurisdictions, foreign currency fluctuations and IMAX's prior restatements and the related litigation and investigation by the SEC and the ongoing inquiry by the OSC. These factors and other risks and uncertainties are discussed IMAX's most recent Annual Report on Form 10-K and most recent Quarterly Reports on Form 10-Q.

What are you talking about? You didn't honestly believe the finale of an eight-movie-long genre defining epic that mostly everyone around the age of 20 have grown up with would ever lose to a Michael Bay action flick? Did you?

What are you talking about? You didn't honestly believe the finale of an eight-movie-long genre defining epic that mostly everyone around the age of 20 have grown up with would ever lose to a Michael Bay action flick? Did you?

I can never tell if you're joking or not...

prowl123 wrote:This should be the reboot:

When the Decepticons land on earth, a little kid (10 or 11)named Daniel Witwicky goes to see what happened. He discovers the Decepticon ship. As he is exploring, Starscream sneaks up behind him, and attempts to kill him. Before he can, Bumblebee tackles Starscream. He beats starscream down enough to be able to get out of the Nemesis with Daniel. Daniel then meets the Autobots.

Either something like that, or they should make a straight remake of the best episodes of G1.

They may not reboot just carry on with Megatron`s remains or dust drifting off into the air then space and becoming Galvatron he then he creates the sweeps. Soundblaster and maybe the Stunticons and Combaticons
Click here to view additional comments about this topic at the Energon Pub Forums ...