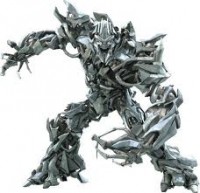 He was one of the first leaked figures from the upcoming Transformers: Dark of the Moon line, and now we finally get a full video review of Voyager Megatron. YouTube member 747turtle has uploaded a video review including a step by step run down of his transformation and size comparison with ROTF Mixmaster. Watch the view on YouTube by clicking here or watch it below.

Re: Transformers: DOTM Voyager Megatron Video Review (1178189)
Posted by Jacob P. Galvatron on February 6th, 2011 @ 4:23am CST
Honestly, I thought the review itself was pretty good.
Megatron though. A little peeved that he's kinda smallish, but I'll end up with one anyway.
Re: Transformers: DOTM Voyager Megatron Video Review (1178190)
Posted by im ruined on February 6th, 2011 @ 4:42am CST
utter crap
Re: Transformers: DOTM Voyager Megatron Video Review (1178200)
Posted by Carnivius_Prime on February 6th, 2011 @ 5:10am CST
Looks pretty cool and I like the cape and hood (and I disagree that it should have been made from cloth, cloth capes look terrible and have annoyed me on other figures I've owned whereas the rubber at least keeps it looking a good shape). It's just the size that lets it down a bit for me. Figures seem to be getting smaller but more expensive these days. Also the black bumper bits are annoying in that you have to take them off and clip them. I thought we had moved on from 'partsformers' crap. At least the mech gear or whatever it's called weapon can be stored away in truck mode to not look stupid like a lot of them do. I far prefer weapons that can be hidden away in alt mode, but these are annoying and make the vehicles have unsightly holes.

While I like the Megs has an actual alt mode this time around, I'm just not liking a lot of what I see.

The Phantom of the Opera cape is silly.
A claw thingy instead of a fusion cannon is lame, and the phenomenon of the incredible shrinking voyagers cheeses me off.

I may end up with him, if they hit a sale, just to round out my movie Megs lineup, but he's not on my "must buy" list.
Re: Transformers: DOTM Voyager Megatron Video Review (1178243)
Posted by ConBotFormer on February 6th, 2011 @ 10:20am CST
Megatron is a septic truck.

You heard it hear first from ConBotFormer

Hope he gets a leader class.
Re: Transformers: DOTM Voyager Megatron Video Review (1178249)
Posted by Kibble on February 6th, 2011 @ 10:46am CST
My initial thought on this fig was pretty much wait and see. After the review, I'm less impressed. It's not complete garbage, but there's plenty not to be crazy about. Limbs seem long and lanky, the cloak is necessary to hide the new Skids/Mudflap-like head, and while the weapon can at least be concealed, it's still pretty awkward and unsightly. Certainly not a must have, but nothing from DOTM really seems to be.
Re: Transformers: DOTM Voyager Megatron Video Review (1178256)
Posted by xtsaur on February 6th, 2011 @ 11:29am CST
Definitely hoping for a leaderclass version. I am glad he got an Earth mode, as i have never been fan of the Cybertronian forms. I also kinda dig the cape... could work well to hide his scarred face. This character sort of reminds me of general Grevious from star wars (not necassarily a bad thing). Have to wait and see what the finished character is like on screen. I cant wait to see Soundwave... hopefully he finally gets an Earth mode.

SenorCardgage wrote:I don't see why everybody hates the cape... it's a cool detail in truck mode...

I'm surprised no one (to my knowledge) has mentioned this: It's on the wrong end of the trailer.

For it to be billowing or flapping the way it is, Megatron would have to be driving at high speed in reverse.

Also annoyed by the tires on the sides of the tank. They look completely out of place - when I first saw them I assumed they had to be there to hid some gimmick, they were buttons or something. Knowing now that they don't seem to do anything makes them ugly and pointless, which just seems to make their ugliness uglier. Are they there just to make his 'gun' look more vaguely G1-ish?
Re: Transformers: DOTM Voyager Megatron Video Review (1178329)
Posted by MatrixWithinUs on February 6th, 2011 @ 3:04pm CST
I like the figure overall. Looking at it from a custom point of view, I'm sure I'm not the first one to think this but, I see Motormaster