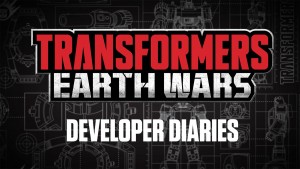 It never ends! Another update today from the folks behind Transformers: Earth Wars - Space Ape Games - in the form of two new videos, one old and one just released, from their Developer Diaries videos. Join Debs and the rest of the team as they go through some of the features in the creation of the game, and including Transformers comics cornerstone Simon Furman in The Universe of Transformers and ...yours truly as co-host in the Fan Influence video!

probably be the only way well get to hear welker and cullen use his dialogue. the games not realy up my street but i'll be streaming the youtube clips of any cut scenes now.

Re: Transformers: Earth Wars Developer Diaries, Featuring Simon Furman, Va'al, and More (1794071)
Posted by Cobotron on May 31st, 2016 @ 9:37pm CDT
Well that was a treat to see the Seibertronians in there. Some other familiar faces too.
I knew you guys had gotten to go visit, but I didn't know you went as consultants!
Super cool guys.

Re: Transformers: Earth Wars Developer Diaries, Featuring Simon Furman, Va'al, and More (1794191)
Posted by carytheone on June 1st, 2016 @ 11:50am CDT
Cool videos, I'm surprised to see how much work and research has gone into a mobile game. Guess I need to open my mind up a bit.

Super cool to see some familiar faces being involved.

Re: Transformers: Earth Wars Developer Diaries, Featuring Simon Furman, Va'al, and More (1794193)
Posted by Seibertron on June 1st, 2016 @ 12:05pm CDT
Courtesy of our friends from TRANSFORMERS: EARTH WARS, we now have bios and images of 5 Transformers characters from the Decepticon roster. Included in this post are Megatron, Starscream, Soundwave, Bludgeon and Razorclaw. You can click on any of the images below to pre-register for Transformers Earth Wars. The bios are written by fan-favorite Simon Furman of Transformers comic book fame.

In his own way, Megatron is as much an idealist as his Autobot counterpart Optimus Prime, but Megatron's zeal sprang from a committed belief that beings such as they were made to conquer and rule, and that any hint of compassion or mercy was an insult to their Primus-given power. On Cybertron, he tapped into the frustration of those like him and enflamed their revolutionary leanings. The Megatron way was and is to rule through intimidation and fear.

Vain, arrogant, ruthless and self-serving, Starscream believes he was made to rule, not to serve, and he'll stop at nothing to advance his own cause.He'll betray anyone, ally or enemy — and that extends to his own leader, Megatron, whose tactics Starscream views as antiquated. He believes conquest is made from the ashes of his enemies, and woe betide anyone who gets in his way.

Though Soundwave appears remote, detached and clinical, he secretly delights in the cries and screams of his enemies. It's literally music to his audio receptors. Beneath his expressionless exterior beats the generator coil of a born blackmailer and opportunist, and it's wise to be very careful what you say within audio range.Though it's said that Soundwave can hear a fly sneeze a whole City State away. If that's not enough to put fear into the spark of an Autobot, Soundwave is joined by his minions Lazerbeak, Frenzy and Rumble who can shake, break and spy on even the most diligent bot. Be afraid, be very afraid.

Mysterious, stealthy and deadly, Bludgeon is a master of the ancient Cybertronian martial art of Metallikato, a combat style that borders on the mystical.The consummate assassin, Bludgeon locks on to his victim like a silent guided missile, and won't stop or deviate until he's claimed his scalp.A master swordsman, Bludgeon hides his true robot self behind an outer shell designed to strike icy dread into his victims.

Razorclaw despises waste in any form, and that extends to his own energy output. So it's perhaps understandable why so many mistake his long stretches of inactivity as laziness, when in fact his optics are carefully monitoring his surroundings, waiting for the optimum moment to strike. Suddenly, Razorclaw will explode into furious, ferocious action, during which his opponents are literally torn to shreds.

What the heck would the inner robot turn into since that form already turns into a tank. A smaller tank?
Re: Transformers: Earth Wars Developer Diaries, Featuring Simon Furman, Va'al, and More (1794218)
Posted by D-Maximal_Primal on June 1st, 2016 @ 1:51pm CDT

Carnivius_Prime wrote:'Bludgeon hides his true robot self behind an outer shell'

What the heck would the inner robot turn into since that form already turns into a tank. A smaller tank?

Re: Transformers: Earth Wars Developer Diaries, Featuring Simon Furman, Va'al, and More (1794230)
Posted by MGrotusque on June 1st, 2016 @ 2:45pm CDT
I'm real happy we got all bran new artwork and bios for these characters we've never heard of before!! How exciting.

You can find the Android Release right here in Google Play: https://play.google.com/store/apps/deta ... searthwars

You can then register right here: http://smart.link/5744bec51a8cf?site_id=Seibertron.com
and make sure you sign up for the Seibertron.com Autobot or Decepticon alliance. Simply Search "Seibertron"

And finally, a little video to help pump you up:

Cary uses a souped up Jazz.

Jazz makes everyone else cannon fodder.

Re: Transformers: Earth Wars Developer Diaries, Featuring Simon Furman, Va'al, and More (1794322)
Posted by Supreme Convoy on June 1st, 2016 @ 11:39pm CDT
I tried downloading the game on my iPhone 6. It stalls while "loading" or "installing."

Haven't tried my iPad Air yet. I deleted it off my phone, hopefully there's an update soon.

PeterPrime wrote:It says the game does not support my device, I do not understand...

D-Maximus_Primal wrote:Or be like Cary.
Cary uses a souped up Jazz.
Jazz kills everyone.
Jazz makes everyone else cannon fodder.
Be like Cary. Use Jazz.

Burn wrote:Cary needs to realise that Burn has a Mixmaster that can obliterate just as good as Jazz.

The real way to be like Cary is to keep your hands clean and let others do the fighting while monologuing in 3rd person.
*strokes beard, sips coffee*

dragons wrote:See how long this game lasts before it gets cancelled

As someone who has been playing this game for months, and has watched it evolve and improve in real time, cancellation seems extremely unlikely.
Re: Transformers: Earth Wars Developer Diaries, Featuring Simon Furman, Va'al, and More (1794354)
Posted by Kyleor on June 2nd, 2016 @ 9:23am CDT
FYI: Supposedly to get your pre-registration reward character you have to use the link sent to you via email, which just dumps you into the regular app store for your device to download the regular version of the game. But your reward character doesn't show up. Supposedly they're 'working on it'. Not a good start to the game if the devs can't deliver on their pre-registration offer.
Click here to view additional comments about this topic at the Energon Pub Forums ...