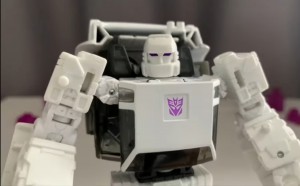 Thanks to a heads up from a handful of Seibertronians, we have a new video review for yet another upcoming figure from the Earthrise line! This video review comes to us from Kremzeek's Reviews and though short, does show off the figure in great detail, and shows the transformation for this new mold, which, unfortunately, includes a case of fake parts in robot mode.

This fan-voted character is scheduled for release in Wave 3 along with Sunstreaker, Trailbreaker, and Fasttrack. This wave should be out in the fourth quarter of this year, though with Wave 2 still not having shipped or shown up at brick-and-mortar retail, it's possible that it may be delayed.

So are you looking forward to getting this half of the Battlecharger duo? Let us know your thoughts and stay tuned to Seibertron for the latest in news and reviews!

Big F in the chat for my boy.
Re: Transformers: Earthrise Runamuck Video Review (2077333)
Posted by blackeyedprime on August 24th, 2020 @ 6:29am CDT
Only want him for his bot mode so I'll be waiting for discounts, doesnt give me hopes for the other battlecharger. Would have been better if the fake wheels were painted to match the real wheels in bot mode.
Re: Transformers: Earthrise Runamuck Video Review (2077420)
Posted by cruizerdave on August 24th, 2020 @ 6:25pm CDT
That car mode is having a hard time staying together. And come one Hasbro, a car that can't roll? I thought you had that mastered 40 years ago.

Too bad, because him and his brother are the ones I've been looking forward to the most this year.