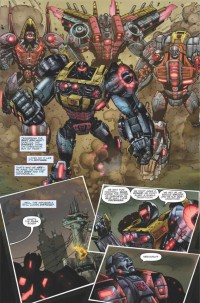 The official Transformers facebook page has shared a Q&A with artist Dheerja Verma, who is currently illustrating IDW's digital format Transformers: Fall of Cybertron comic. The session is has been mirrored below for those without facebook access.

Q: Welcome to the world of the TRANSFORMERS, Dheeraj! How did you come to be involved in the Transformers: Fall of Cybertron comic?

DHEERAJ VERMA: Ah, well I contacted [IDW Publishing Editor in Chief] Chris Ryall to see if I could work on Transformers. I’ve actually done a lot of zombie stuff, but Transformers, I found, are one of the best things to draw—and very interesting, too. A big thanks to John Barber—he gave me the chance to draw, and I am on board right now. I love this series, it’s very well written and exciting.

Q: Was Transformers something that you grew up with and always wanted to work on?

DHEERAJ VERMA: Nope, I have watched all the 3 movies and that’s it. After that I wanted to draw these magnificent characters. I had done some sketches before, to understand these wonderful creations.

Q: How have you found drawing the Transformers characters, compared to the other comic work that you have previously done?

DHEERAJ VERMA: I have done zombies for international comics, but after watching Transformers on screen, it was impossible to stop myself from drawing them. I want to work on Transformers for a long time.

Q: Since the Dinobots are in the Fall of Cybertron video game, were you allowed to contribute to their designs or did you have to follow what High Moon Studios had already done?

Right now, I am following High Moon Studios’ reference. But for the comic book, I am adding some from my end—for issue two, I have tried to create tank modes for them. Learning these characters now helps you to do better work in the future.

Q: On average, how long would you say it takes you to draw a page, and what are the preferred tools that you use?

DHEERAJ VERMA: I start my page around 11 am and don’t finish ’tll 2 am. You can understand that how much I am into it. I can’t leave my page half done… it gives me a headache if I do. Tools are not important—your mind and your hand are the most important tools ever. Normally I use Staedtler mechanical pencil and clutch pencil for details. I can do art directly on a computer too, but I prefer to do manually.

Q: In drawing a Transformers comic, what would you say was the greatest challenge that you faced?

DHEERAJ VERMA: I am still facing it, from zombies to Transformers. They’re heavy duty machines, and I have to remind myself of their specific parts—and their anatomy is most important thing. But thank God, now I can do these without any ref.

Q: Would you ever be tempted to switch over to drawing a comic completely digitally, as some artist are doing these days?

DHEERAJ VERMA: Yeah, I have 18 years experience in Photoshop. I can do digitally too.

Q: Having done the Fall of Cybertron comic, would you like to return to the Transformers again and draw some other incarnation of them?

DHEERAJ VERMA: Yes, of course. It took time to understand these machines. I’d like to work on these for a long time.

Q: To any artist who is trying to break into the industry, what advice would you give to them?

DHEERAJ VERMA: Their dedication to their work is most important thing. Hard work will take you on the top.

Q: Lastly, would you rather be an Autobot or a Decepticon?

DHEERAJ VERMA: Difficult question… both are awesome. Autobot will be fine.

Posted 4 days ago
News Categories: Toy News, Movie Related News, Cartoon News, Comic Book News, Site News, Rumors, Event News, Digital Media News, Collectables, Sponsor News, Game News, Site Articles, Store News, Company News, People News, Press Releases, Reviews, Sightings, Unlicensed Products News, Auctions, Transtopia, Interviews, Knock Offs, Collector's Club News, Editorials, Heavy Metal War, Podcast, Contests, Book News, Top Lists
Click here to post your comment about this news story!
Re: Transformers: Fall of Cybertron Comic Artist Dheerja Verma Q&A (1422232)
Posted by padfoo on September 20th, 2012 @ 6:46pm CDT
While I will always welcome anyone who wants to create high quality Transformers related content. I have a couple of comments about Mr. Verma's work, first the art is not bad and is a welcome change........ But Transformers must transform and not break apart and reassemble, second the idea of Swoop being a tank does not make sense! He has always been a flyer so why make him into a tank that does not fit based on his Cybertronian (bipedal) mode? Finally check out some other Transformers material besides the movies!