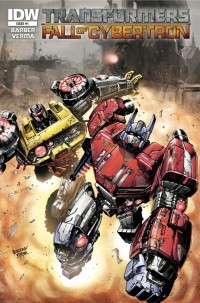 The official Transformers facebook page has posted a Q&A session with writer John Barber regarding IDW's new Transformers: Fall of Cyberton digital comic, which launched today. Click here to download your copy for .99 cents. The Q&A is mirrored below for those who may be without facebook access.

Q: You’re already editing the Transformers line of comics for IDW as well as writing the Robots in Disguise series. What made you want to be the writer on this comic?

JOHN BARBER: Well, what really happened is when we started to work on the Art of the Fall of Cybertron book, this idea of doing tie-in comics came up. The digital world seems like the best place to do a comic like this—we’d had a tremendous success with the Transformers: Autocracy digital comic (still on sale, because it’s digital and it stays on sale!). And we thought, the audience of Transformers fans that love the games and might want to try a comic… well, the digital world seemed a natural fit. You don’t have to go anywhere, you just see the link and buy the comic on your computer, or your phone, or your tablet. And maybe these new people, who might not have checked out a comic before, will see something they like, and maybe they’ll want to check out some other comics, too.

So we decided we were going to do it, and because I was interacting with the guys at High Moon Studios already, and I knew about the Fall of Cybertron story, and people seem to be enjoying the Robots in Disguise comic… it seemed like bringing somebody else in would just create a position where I was acting like a middleman. So I came back and talked to my editor, Carlos Guzman, and to Chris Ryall, the editor in chief of IDW, and we figured it might be the best route to go, to have me write it and Carlos edit it.

Q: This comic is dealing how the Dinobots came to be in the game. Was it hard to ignore previous incarnations of them while writing them as brand new characters in this comic?

JOHN BARBER: I didn’t really want to ignore previous versions. This is all part of the mainline Prime continuity, so everybody’s trying to take the best parts of all of Transformers history and use what works. The Dinobots in the G-1 cartoons were always different from the G-1 comics, and this iteration pulls a little from each version—and elsewhere—and injects a lot of new stuff, without making them feel not like Dinobots, if that makes any sense. The essence remains the same. But, yeah—I’m mindful that these aren’t the exact same guys as are in the Robots in Disguise comic.

Q: Having tied up the continuity from the Transformers movie comics and novels, did you face any similar kind of challenge here?

JOHN BARBER: This is more of a straight-ahead action story, with some nods to stuff that happens in the novels. But, honestly, pretty small nods. This is really focused on the Fall of Cybertron game.

Q: The game obviously ties in with the continuity of the Fall of Cybertron game. How closely did you work with High Moon Studios to get everything right?

JOHN BARBER: I sat down with Dave Cravens for an afternoon—he’s the head writer on the game. We sat down and talked story and talked about what the comic could be, and we basically broke the story there. Then I’d email the outlines and scripts to him, and of course to the Transformers team at Hasbro. So we all did our best to get it right.

Q: From the characters you’ve written so far, who has been the most fun and who have you found to be more of a challenge?

JOHN BARBER: Well, I’d never written Grimlock before, and this version of him especially—this story is set before the Dinobots become the Dinobots, and Grimlock is a smart ’bot. He’s a tactical genius, not a monosyllabic dude like in the cartoon. He’s more like Simon Furman’s take on him, in a way. But he’s still really aggressive, and he still takes big risks, and he’s still got the arrogance of Grimlock. So getting that together, and making it work on the page (er, screen)… well, hopefully it comes through.

Q: We have a new artist to Transformers working on the book in Dheeraj Verma. How did you come to choose him for the project?

JOHN BARBER: Dheeraj had sent in some samples—he’s done a ton of comics work in India and elsewhere, but I hadn’t seen it before. So, even though he’s already an established artist of comics (and, coincidentally, of video game design!), he was effectively just sending the samples in, cold. And he had some movie-universe Transformers stuff, and a couple cool shots of Iron Man and War Machine, and I thought he’d bring something cool and dynamic to the series. He’s great at exciting storytelling, and he can do metal guys? That’s always an impressive combination.

Q: What kind of events and characters (other than the Dinobots) can we expect to see through the mini-series?

JOHN BARBER: The series is very focused on the Dinobots, especially Grimlock. But we’ll see Shockwave, Starscream, Optimus Prime, a little Jazz, Perceptor, lots and lots of Insecticons… and tons of action.

Q: Have you had an opportunity to play the game or see any of the footage from it? And what were your initial impressions of it?

JOHN BARBER: Oh, yeah—getting to see early footage was one of the most exciting things about this whole thing. The game looks amazing. If you liked War for Cybertron, well, here’s something bigger and more amazing… It’s just stunning, what High Moon and Activision are doing.

JOHN BARBER: Only if you stop asking me questions!!! Seriously—thanks a lot. Hope you guys all like the comic!