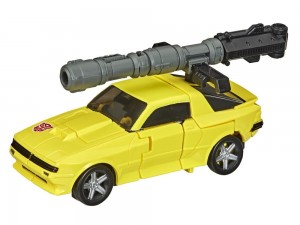 Another newly (officially) announced figure, another in hand review from PrimeVsPrime! Seibertronian LinaNui let us know about this review for Hubcap's first new figure in 34 years. As with the original figure, Hubcap is a slight retool and significant recolor of the Cliffjumper mold, casting him in yellow plastic and paint, and giving him his traditional orange face. In something of an unusual move, his weapon, while being almost exactly similar to his mold-mate, includes a piece of Siege Brunt's cannon instead of both of Cliffjumper's dual pistols.

Are you planning on getting Hubcap, fellow Seibertronians? As a Generations Selects figure, Hubcap is available at Pulse, as well as our site sponsors, who are listed below.

This is literally the same mold as cliffjumper, just with different color and head.
Re: Transformers Generation Selects Hubcap Review (2073074)
Posted by SpikeyTigertron on July 21st, 2020 @ 6:44am CDT
I got a feeling he was supposed to come with the other “gun” component from Cliffjumper’s Bazooka and the factory/cad files goofed