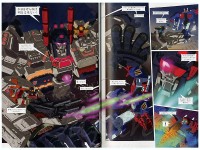 
Enjoy the preview images mirrored below. Bring on the Metrotitan recolour of the new Metroplex
Re: Transformers Generations 2013 Preview Pages (1509406)
Posted by Seibertron on August 5th, 2013 @ 9:17am CDT
Metroplex is way too big in those drawings. Omega Supreme shouldn't be that small compared to Metroplex, nor should Superion. Smaller, fine. Maybe to his waist, upper torso? I dunno. But Omega Supreme shouldn't be small enough to fit inside one of the weapon bays on Metroplex, that's for sure. And Metrotitan should be the same size!
Re: Transformers Generations 2013 Preview Pages (1509450)
Posted by Sabrblade on August 5th, 2013 @ 11:03am CDT
That new story is called "Metro War", written by Yuki Ohshima, and set in the Japanese G1 cartoon continuity, being set after both Operation Combination and United EX, but before G-2.

As for Omega Supreme, he was the same size as the G1 combiners in the cartoon, so he'd be their size here, and looks appropriately so with Superion not too far away from him in that image.

But, if Metroplex still looks to be way too big in that pic, there's a very simple explanation. Since this is the cartoon continuity, we know what Metroplex looked like in the cartoon and it certainly wasn't that design. Therefore, he's gotta be in a new body here, one that likely upgraded his size even further.
Re: Transformers Generations 2013 Preview Pages (1509591)
Posted by hinomars19 on August 5th, 2013 @ 8:34pm CDT
The simplest explanation for Metrotitan's size is that he was from Zone-meaning he was a Micromaster base: i.e unlike Metroplex, who's toy was not an accurate portrayal of his size in the fiction (compared to other characters' toys), Metrotitan was the size/scale of his toy in fiction.

Much like how Grand Maximus in Masterforce is toy size (with God Ginrai riding on him), Unlike fortress Maximus who was portrayed at TF city scale in Headmasters (with full sized characters like chromedome coming out of tiny doors in his foot), not his toy size.

And yes, I agree with Sabre. Omega was the same size as Devastator in the G1 toon. Combiners are big, but Metroplex is big enough to fit half to 3/4 of a combiner in his hallways (or near enough) A combiner would be nowhere near the size of Metroplex's leg even, much less higher, I'd say. Metroplex is an entire city for Full size TF's. Although that said combiners and Omega mass shifted to suit purpose thanks to wonky planning by writers and animators of season's 1-3. Look at Astrotrain for crying out load. In bot mode he is as tall as Megatron yet in shuttle mode he can carry 20 of him

I stand by my Metrotitan explanation though