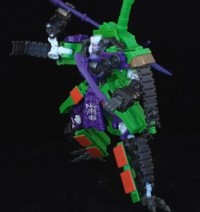 Site sponsor Kapow! Toys has uploaded a video review of the Transformers Generations GDO Voyager G2 Megatron, a redeco/remold of Transformes ROTF Bludgeon. The review is embedded below.

Now, what will I do with him? Oh yeah! He can loiter over here with the G2 Botcon set and the new G2 Jazz.


Trading in his Fusion cannon for an equally destructive and shock-inducing neon dayglo color scheme, G2 Tank Megatron's overt brashness is second only to his nuclear paint scheme. Can link up inter-dimensionally to a green highlighter marker hidden in a sub-space pocket to draw power.

As is, Hot Spot, Wheelie, Springer stick out as the best of the lot. Cliffjumper surprised me as being pretty nice, too. Megatron isn't at the top, but still is eeking his way into the middle somewhere for me.

At least these Asia exclusives are still from the last round of full-sized, full-quality, fully-articulated molds. While the FOC molds have been interesting, and I love the game, the FOC line has indeed made me sad at the drop in size and quality... and simultaneous rise in price.
Re: Transformers Generations GDO Voyager G2 Megatron Review (1427961)
Posted by Sentinel Maximus on October 7th, 2012 @ 8:19pm CDT
About the bio,...

Nothing to do with COBRA? Awwww