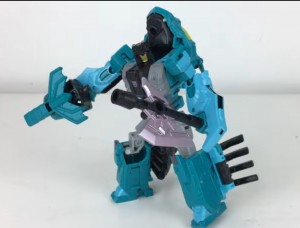 Thanks once again to Seibertronian PrimeVsPrime, we have another video review of a highly anticipated figure which was recently released in Japan, and has found its way to other parts of the world as well, the Seacon Lobclaw (known as Nautilator outside Japan)!

Lobclaw is faithful to his Masterforce coloring in lobster mode, as he and the other Seacons are a Takara Tomy initiated project, and they only appeared in animated form in the Japanese G1 cartoon. In robot mode, he's more like his original G1 toy.

PrimeVsPrime goes through all Lobclaw's modes, and notes a few potential QC issues, though none of them are detrimental to enjoying the figure.

Lobclaw is now available if he was ordered via most online e-tailers, and Hasbro Pulse has him shipping out in early April.

King Poseidon/Piranacon is almost complete! Just Overbite and Tentakil remain to complete the final G1 Scramble City-style combiner. What do you think of this figure? Let us know below, and enjoy the review!