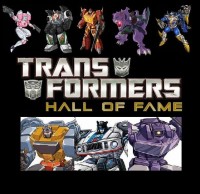 Posted on Hasbro's Transformers.com are the five Fan's Choice Finalist for the Botcon 2012 Transformers Hall of Fame! They are:

ARCEE has gone through many changes during her career as an AUTOBOT. From pink and white colors to a sleeker dark blue, ARCEE is one of the few female TRANSFORMERS to stand the test of time. ARCEE has proven herself in battle time and time again - whether it is against UNICRON, SHOKARACT or even JAHIAXUS. ARCEE has lost many partners during the Great War, but her most painful memory is losing her comrade CLIFFJUMPER at the hands of STARSCREAM. Two people she could never do without, however is her human friend JACK DARBY, and her great-nephew, RATTRAP.

“You shall vote for me. Yesssssssss."

Using the former leader of the DECEPTICONS as his namesake, MEGATRON orchestrated a plot to steal the Golden Disc, an ancient relic from the time of the AUTOBOT/DECEPTICON war. The disc led MEGATRON and his PREDACON crew to ancient Earth, where they, along with the pursuing MAXIMALS, reformatted into indigenous life-forms, instigating the BEAST WARS. After MEGATRON conquered the alien technology of the Vok, discovered the crashed Autobot Ark, nearly killed OPTIMUS PRIME, and gained control of the DECEPTICON warship NEMESIS, he was eventually defeated and returned to CYBERTRON by OPTIMUS PRIMAL. Once there, MEGATRON created an army of VEHICONS to help him conquer the planet. Unfortunately his beloved rubber ducky was left behind on primitive Earth.

“Statistically speaking I should be the winner."

WHEELJACK has built everything from magnetic inducers to immobilizers to gyro-inhibitors, and even the occasional DINOBOT. While his inventions often indeed do what they are supposed to, they just as often blow up. WHEELJACK is also a member of the WRECKERS, a division of AUTOBOT warriors who don’t play by the rules and often take on missions that others can’t - or won’t. When called upon, WHEELJACK serves as the chief weapons officer and ship’s engineer for the team. His personal ship, the JACKHAMMER, served as his mobile headquarters in the wake of the great shutdown of CYBERTRON. WHEELJACK had made it his personal mission to cruise the stars in search of lost AUTOBOTS, but specifically for WRECKERS who have lost their way.

“Everyone knows I’ve got the potential to win!”

RODIMUS is young, naïve, headstrong, and daring when it comes to his own safety in the field. Willing to push himself to the limit in order to get the job done, RODIMUS is known for conceiving highly dangerous plans to achieve his objectives. Believing that no bot should ever be left behind, RODIMUS will even put his own spark on the line to keep this promise to all who serve under him. Despite his immaturity, RODIMUS is considered an inspirational figure to many of his fellow AUTOBOTS, and some have even come to call him RODIMUS PRIME. Unfortunately, one time RODIMUS got in OPTIMUS PRIME’S way with disastrous results.

“Who's the baddest shark around? Who's the smartest shark in town? Sky-Byte, that's me! ”

A proud PREDACON to the core, SKY-BYTE lead his warriors into battle against AUTOBOTS or DECEPTICONS. His desire to be in MEGATRON's good favor drove him - and sometimes he got lost. His skills are legendary amongst the PREDACON ranks. Legendary because SKY-BYTE rarely completed a mission. He has a soft side for poetry - a skill no one else has - or wants. If it weren't for SCOURGE and the DECEPTICONS, SKY-BYTE would never have strayed from the PREDACON cause. In his jealous rage, SKY-BYTE looked to the enemy for acceptance - including KOJI and the AUTOBOTS. Perhaps that is why the AUTOBOTS allowed him to remain free on Earth after the final battle - where he currently roams the ocean attacking illegal fishing vessels.

One of the above listed characters will be chosen to join the 3 HoF inductees already selected:

GRIMLOCK fought his way through the gladiatorial pits underneath Kaon to become one of the greatest warriors on CYBERTRON. Having joined the AUTOBOTS early on during the Great War, GRIMLOCK made it clear he never trusted OPTIMUS PRIME to properly lead the AUTOBOTS. Due to his shock and awe approach to combat, GRIMLOCK is not regarded as a great military leader. However, he has fought and survived through enough battles to earn top ranking position among the AUTOBOTS. Having struck out on his own, GRIMLOCK eventually found himself leader of the DINOBOTS, a special operations strike force unit that can power through most barricades and DECEPTICON strongholds. During a battle with the DECEPTICON SCORPONOK, GRIMLOCK¹s vocal processors were damaged, leading to his awkward and distinct way of speaking. If GRIMLOCK has a weakness, it is his larger-than-Prime ego and his lack of patience.

"I do everything with style!"

Before OPTIMUS PRIME became leader of the AUTOBOTS, he was known as Orion Pax and AUTOBOT JAZZ was his closest friend. Respected by his fellow AUTOBOTS for always taking the most dangerous missions in the war against the DECEPTICONS, AUTOBOT JAZZ became one of the best lieutenants for OPTIMUS PRIME. Always selecting a fast and stylish alt mode that reflects his cool and competent demeanor, and having studied the ways of the Cyber-Ninja, AUTOBOT JAZZ always takes in the situation before making any decisions. Once on Earth, AUTOBOT JAZZ quickly became enthralled with its many different cultures. Fascinated by Earth¹s music, AUTOBOT JAZZ seamlessly picked up human slang, which he often uses to relieve tension amongst the ranks.

"Logically, I have been selected for his honor."

SHOCKWAVE has always based his actions on the most logical choices. Having joined MEGATRON during the early days of the Great War, SHOCKWAVE believed MEGATRON would quickly crush the High Council and bring about a new order to CYBERTRON. AUTOBOTS and DECEPTICONS everywhere fear SHOCKWAVE for his unethical experimentations. SHOCKWAVE believes that through his work, he will discover a better form of existence for CYBERTRONIANS everywhere and sacrifices must be made to accomplish this. To further his goal of reformatting the species, SHOCKWAVE stayed behind to lead the DECEPTICON forces on CYBERTRON during the Great Exodus. On the surface, SHOCKWAVE is unquestionably loyal to MEGATRON, however this only masks his true intentions of ruling all over all sentient beings in the universe.

At least more people actually know who Sky-Byte is. He's a welcome suprise.

(Also, who the heck writes these things? They're nigh-unreadable, especially with all the random CAPITALIZED NOUNS. Since when is Rattbat Arcee's "great-nephew"? How could a Transformer even have a great-nephew?

And what does this even mean?
"Unfortunately, one time RODIMUS got in OPTIMUS PRIME’S way with disastrous results.")
Re: Transformers Hall of Fame 2012 Finalists Anounced! (1356141)
Posted by MINDVVIPE on March 8th, 2012 @ 11:23am CST

TheForgottenTaxi wrote:And what does this even mean?
"Unfortunately, one time RODIMUS got in OPTIMUS PRIME’S way with disastrous results.")

Optimus was trying to make some toaster strudle, and Hot Rod in the way and tripped Prime, causing him to fall and jam his fingers in the toaster and die. COZ AUTOBOTS ARE WEAK!!!

Can one of the people pushing this Sky-Byte thing please explain the joke to the rest of us?

He is one of the least liked characters in the TF universe, it isn't that funny a joke.

Also, who the heck writes these things? They're nigh-unreadable, especially with all the random CAPITALIZED NOUNS.

Hasbro writes them, and if you've ever bought a toy and read the bio, they have CAPITALIZED NOUNS through them.

Since when is Rattbat Arcee's "great-nephew"?

It is Rattrap, not Rattbat (Unless you're referring to Ratbat the cassette) and he has been since the episode "Transmutate", where he demanded to know what was going on in the name of his great-aunt Arcee, after being buried under a rockslide cuased by a overloaded stasis-pod

How could a Transformer even have a great-nephew?

I'll let the experts tell you, from every point of view http://tfwiki.net/wiki/Reproduction

And what does this even mean?
"Unfortunately, one time RODIMUS got in OPTIMUS PRIME’S way with disastrous results."

As I am not familier with the comic contunuity, I would not know.

However if they're refrencing the Hate Plague incident, when Rodimus got infected and (Along with almost every other lifeform) went on a rampage, Optimus was unable to convince him to hand over the matrix to cure everyone and had to take it by force
Re: Transformers Hall of Fame 2012 Finalists Anounced! (1356150)
Posted by El Duque on March 8th, 2012 @ 12:01pm CST

Counterpunch wrote:and I no longer care.

Nor do I, but I have little doubt BW Megs will win. The BW fans will rally all their votes behind him since he's the only BW character represented. The G1 vote will be split three ways and we've got Sky-Byte in there too.
Re: Transformers Hall of Fame 2012 Finalists Anounced! (1356151)
Posted by Noideaforaname on March 8th, 2012 @ 12:02pm CST
I take it nobody complaining about Sky-Byte has seen RiD.
Their loss.