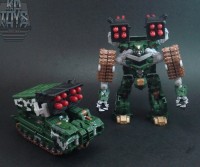 Peaugh did it again and reviewed the upcoming Transformers Hunt for the Decepticons deluxe Hailstorm figure. Hailstorm is a homage to the G2 comic only character Mindset, you can watch Peaughs review by clicking here or right here on seibertron.com!


Stay tuned to seibertron.com for all your Transformers related news!

Stockade wrote:Ok yeah he's short and theres a few things could use improvement, but this is still a bad little dude for a deluxe! I still say repaint him into Beast Box since Hailstorm has that ape-ish look.

Good idea, then make a SquawkTalk or whatever and make a fan combined mode!
Or something...

Anyhow, he looks awesome, as I made up a character with a similar altmode(maybe the same) this gives me a good idea of transformation.
I still say Wreckage retools would make better MindSets...
Re: Transformers HFTD Hailstorm video review! (1099435)
Posted by Optimutt on July 17th, 2010 @ 7:56pm CDT
While I doubt I'll be getting this guy, I must say his transformation is packed with some excellent goodies: the flip-open missile pack reveal, the folded tank tread reveal of the arm, and the shoulder fold-down are all really nice touches, as is the head mobility. Kudos Has-Tak!
Re: Transformers HFTD Hailstorm video review! (1099446)
Posted by wheeljock on July 17th, 2010 @ 8:59pm CDT
Ive always enjoyed Peaugh's videos. In each of Peaugh's videos, he "burps" every 2 or 3 minutes. Its a silent burp, but you can hear it when he takes a breath every 2 or 3 minutes. I think he reviews after he eats.

Mykltron wrote:ONly talk about articulation in passing and doesn't mention the range of motion

Anyone noticed that this reviewer can almost never get figures to stand?


And once again Mykltron can only whine about Peaugh's review. At this point... here's a hint... STOP WATCHING HIS REVIEWS if you hate them so much.

But seeing the inevitable complaints from you about each of his reviews is damn annoying. We get it already, you don't like him, he killed your first born, blah blah blah.

Last I checked his video reviews are still better then your nonexistent video reviews.
Re: Transformers HFTD Hailstorm video review! (1101219)
Posted by AutobotTrainer on July 21st, 2010 @ 3:57pm CDT
There is just something about Hailstorm that makes him a total buy. I may even buy two, one for pure "rip open the box and transform away" and another for customizing (I'm thinking of a Gundam crossover...oh the blasphemy!). The hand articulation, the missile pods, the lumbering stance. All wins here.

Re: Transformers HFTD Hailstorm video review! (1101353)
Posted by Pascal on July 21st, 2010 @ 9:56pm CDT
If you read my review in that other thread, you'd quickly realize that you might not want that toy so bad after all. Not a good figure imo, robot articulation is just weird and the tank mode doesn't hold together very well, takes lots of massaging to get it right.