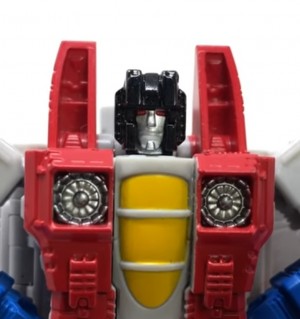 Thanks to regular reviewer PrimeVsPrime, we've got a video review of an anticipated figure from the upcoming second Wave of Kingdom Core Class figures. He takes a good look at the treacherous second-in-command of the Decepticons, Starscream!

Core Class figures replaced the Micromasters of the previous two lines at the $10 USD price point, and it now serves as Kingdom's lowest priced offering. While giving us new characters such as Vertebreak, it mainly serves to give us smaller figures of popular characters so that everyone can enjoy them at any price.

Heading into the review, PrimeVsPrime goes over the figure in detail, comparing it to Earthrise Voyager Class Starscream. While the engineering is completely new, and the transformation is unique for a Starscream figure, it's up to you to decide if you'll be picking this version of 'Screamer up.

Let us know what you think of this figure, now that you've seen this review, and be on the lookout for Starscream and his wavemate Megatron sometime in the next month or two.

Posted 3 days ago
News Categories: Toy News, Movie Related News, Cartoon News, Comic Book News, Site News, Rumors, Event News, Digital Media News, Collectables, Game News, Sponsor News, Site Articles, Store News, Company News, People News, Press Releases, Sightings, Reviews, Unlicensed Products News, Auctions, Transtopia, Interviews, Knock Offs, Collector's Club News, Editorials, Heavy Metal War, Podcast, Contests, Book News, Top Lists
Click here to post your comment about this news story!
Re: Transformers Kingdom Core Class Starscream Video Review (2093750)
Posted by Solrac333 on January 27th, 2021 @ 10:26am CST
This figure and line is a pass for me. After watching THIS video it's an EASY pass.
Re: Transformers Kingdom Core Class Starscream Video Review (2093839)
Posted by Wolfman Jake on January 28th, 2021 @ 10:28am CST
It's a fun, and unique transformation for a G1 Starscream, but it's in no way "superior" to the Voyager Class figure, not even when parsing out the price point difference between the two. There is literally no added articulation in the Core class version, there are missing paint details. The wings are unpainted on the underside, which is more detail missing on the robot mode. I get that it's neat that the cockpit tabs into the back, but it's not like that flops around in robot mode on the Earthrise Voyager Class figure. That's a tight joint and the cockpit stays put in robot mode. The kibble is worse on the Core Class figure in jet mode. You can clearly see the fists sticking out from head on! Prime vs. Prime can love this figure all he wants, but he's kidding himself if he thinks the Voyager Class version isn't superior in almost every way.