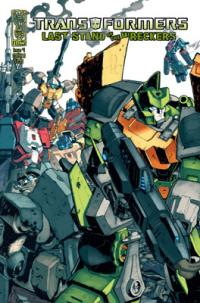 Thanks to Jose Melendez of the Comic Culture Warrior Blog, we now have a definitive release date for the highly anticipated IDW Comic, Transformers: Last Stand of the Wreckers!

Due to hit store shelves on January 27th, 2010, Last Stand of the Wreckers, written and drawn by Nick Roche, will be a five issue spin off of Transformers Ongoing, giving TF fans a look at whats going on off the planet Earth as Springer and his Wreckers investigate a prison planet that fell to Decepticon rule 3 years ago. Last Stand will also feature a special retailer incentive cover release as well, be sure to ask your local comic vendor for it.

Have you been out of the Transformers comic loop? No worries, get all the info you need to get back in the game by visiting our Vector Sigma Database Comics Series section.