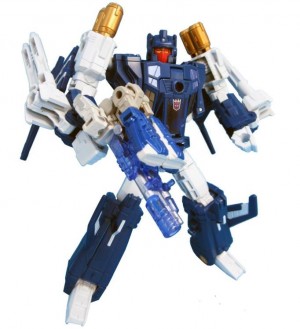 Many people feel that the version of Triggerhappy we got from Hasbro is one of the best-loved figures from the Titans Return line, due in large part to its fun, inventive transformation. However, some felt that the inclusion of characters in the line as Head Titan Masters, when they were Targetmasters in their original G1 incarnations was not as true to their original character as Hasbro made them. Well, Takara took the lead on making that right, creating actual Targetmaster partners to go with their version of the Titans Returns sculpts. One of those such figures is Triggerhappy.

While not as big a deviation from its Hasbro deco as say, Kup, or Hot Rod (also Targetmaster releases via Takara), there are some more noticeable features to point out, and who better to point them out than fellow Seibertronian and regular toy reviewer chuckdawg1999? His video review is embedded below, and points out some of those features as well as spending some good time showing off Blowpipe, the Targetmaster partner to Triggerhappy. Please enjoy, and let us know if you'll be picking up this figure, currently available for preorder.

MegaX Master wrote:I wonder if Takara will ever make a Targetmaster Blurr. If so, I'm sure a lot of people who buy it.

The Targetmaster that comes with Legends Twinferno is meant for Blurr.