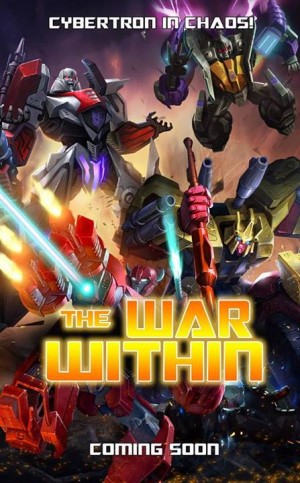 DeNA has announced the latest episode in their Transformers: Legends mobile device game, "The War Within". Click here to download the app, and check out the new promo art for the episode below.

The Great War of Cybertron rages on in a new episode of TRANSFORMERS: Legends. Play "The War Within", beginning today! http://moba.ge/TRANSFORMERSLegends

dedcat wrote:What is going on with Cliffjumpers gun? There is a second, disembodied turret floating next to the one attached to his arm. Someone forgot to hide a layer in photoshop.

I'm thinking it's the Neutron Assault Rifle from FoC dedcat wrote:What is going on with Cliffjumpers gun? There is a second, disembodied turret floating next to the one attached to his arm. Someone forgot to hide a layer in photoshop.

I'm thinking it's the Neutron Assault Rifle from FoC

I am kind of tired of the WFC/FOC bodies showing up in other mediums. Like in the comics, I don't mind so much that the toys look the same, but it's different continuity. In this case, I saw War Within, and I got all excited. Like, I was hoping we'd see some badass artwork of the beloved designs by Mr. Figueroa from back in 02-ish when War Within came out. Ah, the memories.

On a more positive note, I know what I'm going to read over Christmas Break!
Re: Transformers: Legends Mobile Device "The War Within" (1536296)
Posted by Burn on December 18th, 2013 @ 6:34pm CST
I'm sure this is another awesome episode with awesome cards but you know ... every time I play I get the whole "Cannot access SD card or it is full" error which they have no interest in fixing and the only way for me to fix it is to clear my cache.

Umbra wrote:So I finally got a phone that can run this game. How do these events work? And is there any team building strategy besides hitting recommend?

Deck-building strategy
*Don't get attached to R1 or R2 cards (common and uncommon, the ones witha 1 or 2 number value in the top right corner). Trans-scan pairs as soon as you get them to bolster your deck strength and for your cyberdex, and forget about them as soon as they're gone from your deck. You will quickly acquire several R3 (Rare) cards, and if you participate in events you can get some R4 (Super Rare) cards. With time you might be able to get a few R5 (Ultra Rare) cards. You can get an R5 Elita One by logging in every day, and an R5 Sky Lynx by connecting with 15 friends level 8 or under (most of us just made dupe accounts for this).
*For cards of R3 or higher (R4 or higher when you get to the point where R3s won't make your deck), always MTM them: Max, Trans-Scan, Max. This means max level each half of the card (bot and alt) first, then trans-scan them together, then max level them again. This will make sure your card has the highest possible stats.
*Leveling cards up will be hard at first, because you will lack resources. As you collect stronger cards, you can use the weaker ones to upgrade them. Eventually all cards R3 or below will be nothing more than upgrade fodder for you.
*You can also use transmetal to upgrade cards for cheaper. Transmetal is acquired through the daily login bonuses, occasional Mobage gifts, and from events.
*R3 and higher cards all have signature weapons. All R2 weapons and below are generic "energon hammer" types but R3 and above weapons are "Mirage's weapon", "Sky Lynx's weapon" etc.
*The "recommend" button will give you the deck with the highest possible attack power, but this is not the same as the best possible deck. Defense and Health are important stats as well, and a character's signature weapon is usually good at compensating for their particular weaknesses. If you have a character's signature weapon, it's generally best to use it over a different weapon assigned by the "recommend" feature.

*Events last six days each, starting Wednesday at 5 PM Pacific and ending the following Tuesday at 5 PM Pacific, with a day's gap before the next one. Every week.
*Remember that, despite Mobage's claims to the contrary, this game is pay to win. The best cards will be unobtainable if you aren't willing to pay $300 or more per week. If you're normal and don't like paying that much, it's okay, just learn to be happy with the cards you can get. Don't worry too much, in PVP matchups, you won't be paired up with opponents who are leaps and bounds stronger than you. You can still get GOOD cards, just not THE BEST cards.
*There are three event types: boss raid, Player vs. Player (PVP), and Campaign.
*In Raid Boss events, you play through the game normally and you'll randomly find boss cards. There are 4 bosses, with 9 levels each: ?? and 1-8. Stronger bosses will have far too much health for you to defeat without a lot of sacrifice, and are meant to be defeated with help from allies.
*In PVP events, you play through the game normally and you'll randomly find PVP battlefields. In these, you have to build up a win streak by defeating other players. The longer your win streak, the better your rewards. If you lose a fight, your streak is over and you have to find another one and start over.
*In Campaign events, you play through a bunch of new arenas similar to the ones in the regular game, and every other scan will be a mini-boss battle. You can try to capture the cards you face off against with Energon Nets (easily acquired, low capture rate) or Energon Chains (you'll be gifted a few for login bonuses and event bonuses, but mostly you have to buy them, they have a 100% capture rate). You work your way through three difficulty tiers and at the end of each tier are event cards that you can defeat and capture. As a beginner, you will probably only be able to play through the Easy campaign. If you participate in a Capmaign event, you'll get 2 of the Easy campaign event boss card, and you should be able to get enough points to get 2 Energon Chains. use these to capture two more of that card and evolve them.

*Evolving is like Trans-Scanning taken a step further. Instead of matching bot and alt cards, you have to match 4 alt cards and combine them, one at a time. 1+1=2, 2+1=3, 3+1=4 (fully evolved). As with MTMing, it's always best to max level each card before evolving to get the best stats on the final card. Yes, this is very resource intensive and Mobage knows it. They want you to spend money on Transmetal or card packs to upgrade your deck. But understand that with some patience and effort, you can do better and better in events to earn more transmetal and better cards without paying Mobage much or anything.
Re: Transformers: Legends Mobile Device "The War Within" (1536306)
Posted by Nemesis Maximo on December 18th, 2013 @ 7:06pm CST

Umbra wrote:Thank you for the tips. Good to know about the leveling separately first, I will have to do that from now on. I'm a bit sad to learn there is no way to upgrade lower level characters that happen to be favorites into fully usable characters. Also sad there's not bonuses for using characters that should work well together like the dinobots, seekers, or Soundwave and his tapes.

CSR Racing is a better game.

CSR Racing is a better game.

Umbra wrote:The seekers are my favorites, so hopefully they will pop back in an event at some point. No idea how to get the event cards though, i can't even figure out where it says how much chronogon I have

Wow, this new Space Bridge layout is terrible. Doesn't tell you how much of a resource you have when you don't have enough for a pull, and the inventory screen doesn't have Chronogon so you can't check there either. This will probably be fixed soon. Chronogon was JUST added last event and I was surprised they brought it back this time.

http://blog.transformers-legends.com/post/70526229459/sd-card-is-full-error-message
Click here to view additional comments about this topic at the Energon Pub Forums ...