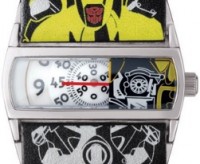 Are you crazy about watches? How about getting a Transformers themed watch for yourself or your loved one?


Stay tuned to Seibertron for all your latest Transformers news.

LittleDickens5 wrote:"If the "Decepticons" was put around the watch like the Autobot words are, I would have considered purchasing one."

The Autobot letters have their bottom edge facing the watchface.

The Decepticon letters have their sides facing the watchface, except for the "T" at 6 o'clock.

Regardless, the watch is very nice. Sleek art deco-y look. It's gotten compliments from 40+ yr olds at poker tourneys. I'm not crazy about the lettering, esp. the second "c" but i can't imagine wanting any other watch now
Re: Transformers Limited Edition Watches (987478)
Posted by tom brokaw on September 1st, 2009 @ 4:36am CDT
its all about meantime from the real gear robots line.... if my wrist was small enough id wear him everywhere

.... and how long do you think til we'll get a device label TF that transforms from a fully functional watch into a bot
Re: Transformers Limited Edition Watches (987481)
Posted by magnusalpha on September 1st, 2009 @ 4:59am CDT
I just wish Takara would release Frenzy and Rumble nipple clamps.
Re: Transformers Limited Edition Watches (987781)
Posted by camshaftRSX on September 1st, 2009 @ 3:19pm CDT
those watches are from the release of the first movie in 2007. they were actually posted on these boards back then too...

the autobot/decepticon were 500 each, sold on amazon/stylinonline/80stees
autobot one sold out.
the pepsi le was 1000 pieces. given to pepsico, who in turn used them to get shelf space for mtndew (at the time, cross-promo with TF) by bribing stores and giving them these watches. also given to Pepsico employees, but never sold at retail.

all the others are kids watches.

i have a few pepsi LE, and autobots ... and lots of the kids ones ... i can put them on ebay if anyone is that interested...

+tony
Re: Transformers Limited Edition Watches (988010)
Posted by shonenfan4 on September 1st, 2009 @ 8:17pm CDT
I want the watch that transforms, I believe it was released back during the G1 days in Japan.