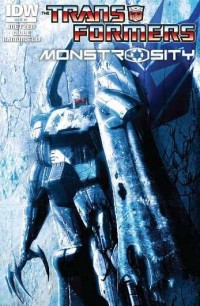 The first issue of Transformers: Monstrosity, the sequel to last year's Transformers: Autocracy, is now available via Comixology. Download your copy for .99 by clicking here.

Transformers: Monstrosity #1 (of 12)
12 CHAPTER DIGITAL EXCLUSIVE SERIES! In the early days of the war on CYBERTRON, OPTIMUS PRIME puts everything on the line to unify the planet-but not everyone agrees that this new Prime should be in charge... Meanwhile, the fallen DECEPTION leader, MEGATRON, begins a journey that will change everything. Plus--what is the terrible secret of the DINOBOTS? All this and more in the first chapter of the digital event of the year! Here's hoping he gets to pop up in MTMTE later on, because there's still so much to be done with him...

Not surprising. They're trying to make their G1 continuity fit with toys on the shelves, and include a few more Aligned continuity nods.

If Hasbro's so keen on making molds from IDW comics, does this mean we might get a new Scorponok or Galvatron (voyager class)?

The site also has a two-page preview, posted below.

A dare to be be stupid.

Not yet, not yet. But thank you.

Re: Transformers: Monstrosity #1 Available Today (1471936)
Posted by Nemesis Maximo on March 15th, 2013 @ 8:37am CDT
Is anyone else slightly annoyed that Grimlock seems to suffer the "Me, Grimlocks"? I thought he was smart in this continuity.
Re: Transformers: Monstrosity #1 Available Today (1473441)
Posted by Va'al on March 21st, 2013 @ 9:26pm CDT
Courtesy of BadHaven.com we have an exclusive interview with Monstrosity creators Flint Dille and Livio Ramondelli.

In 2012 IDW went digital with Transformers: Autocracy, the story of Optimus Prime’s ascent to greatness and leadership of the heroic Autobots. Now the follow-up series is about to be unleashed and once again we travel back in time to a darker, dirtier and altogether more dangerous Cybertron than the one we’re used to… and that’s saying something!

Co-writer Flint Dille and artist Livio Ramondelli give us an insight into Monstrosity!

“The Decepticons are defeated. Zeta is gone. Optimus Prime is in control, but what you realise is that keeping the peace is sometimes harder than winning the war” – trust Flint Dille to find a cloud in every silver lining! It shouldn’t come as a surprise to any longtime Transformers aficionado; this is the man who killed Optimus Prime just half an hour into the original animated Transformers movie, only to oversee his return as an crazed robotic-zombie for a third season episode!


In fairness, Flint was still involved when Optimus Prime returned again in more triumphant fashion towards the end of the animated series’ run;

“Optimus is a great character, but what people tend to forget is that great characters often have times of incredible adversity, inability, unpopularity – how will Optimus hold up? Monstrosity is about what happens after the war – it can go well or it can go badly. It seems like it should go well…”

Parallels are often drawn between Optimus Prime and other real world heroes, and Flint notes similarities between Monstrosity’s stand-up citizen and another great from history, who himself was in the Oscar spotlight recently.

“I recently watched ‘Lincoln’ and I can only speculate on what would have happened if he’d lived, but reconstruction wasn’t pretty. Monstrosity takes place in a world that needs to be rebuilt; not a hopeless world, but a world kind of teetering on the edge of both renaissance and oblivion, kind of like the real world today.”

Transformers comics have been enjoying their own renaissance period in recent times under IDW’s stewardship and artist Livio Ramondelli has certainly played his part in making the stories look as striking as they have done, with Autocracy in particular having a quite distinctive look – chunky yet detailed action-packed panels, with quasi-painted style colouring particularly effective at setting the tone. Explosive reds and dramatic golds, moody blues, contemplative natural greens and soothing, cleansing whites – would Monstrosity continue along a similar vein?

“Monstrosity picks up shortly after Autocracy, and so the planet will look very similar to how it did in the previous series, featuring the same sort of colour palettes,” explains Livio.

Although the story will definitely take us to some new locations – the characters will go to areas of the planet we’ve never seen before, and so the design of those environments will certainly look strikingly different, they’re going to discover a side of Cybertron that isn’t just cities. Also, there will be a major location in Monstrosity that is neither Cybertron nor Earth, and it definitely has its own colour palette, amongst other monstrous properties!”

Did you like Autocracy?
Click here to view additional comments about this topic at the Energon Pub Forums ...