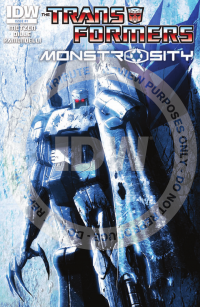 IDW Publishing's digital format series Transformers: Monstrosity comes to print this month and we got the preview below! Available next week, check your local shops.

Transformers: Monstrosity #1 (of 4)—SPOTLIGHT
Chris Metzen & Flint Dille (w) • Livio Ramondelli (a) • Ramondelli x 3 (c)
MEGATRON'S DESCENT! In the early days of the war on CYBERTRON, OPTIMUS PRIME puts everything on the line to unify the planet—but not everyone agrees that this new Prime should be in charge! Meanwhile, the fallen DECEPTION leader, MEGATRON, begins a journey that will change everything. Plus—what is the terrible secret of the DINOBOTS?
*3 regular covers will be shipped in a 1-to-1-to-1 ratio
FC • 32 pages • $3.99
Expected in-store date: 6/5/13
Exploding from the screen to your comic shop!
The sequel to the amazing AUTOCRACY!
Written by Chris Metzen (one of the main creative minds behind Blizzard Entertainment's Warcraft®, StarCraft®, and Diablo® universes) and Flint Dille (writer on the original TRANSFORMERS cartoon)!

And Bulkhead, a lowly engineer and and relative newbie in the Transformers universe, telling the great Dai Atlas to "pipe down". What a legend!

Ramondelli does seem to be cleaning up his artwork, and that can only be a good thing.
We'll see what the story looks like though, I have my reservations about it (though I've heard good things about it from people reading the digital stuff).
Re: Transformers: Monstrosity #1 Preview (1495575)
Posted by Dead Metal on June 15th, 2013 @ 10:16am CDT

Va'al wrote:It is quite the long preview, isn't it?

Ramondelli does seem to be cleaning up his artwork, and that can only be a good thing.
We'll see what the story looks like though, I have my reservations about it (though I've heard good things about it from people reading the digital stuff).

Personally I don't like it, this whole thing went down the drain after the stupid, stupid ending to Autocracy. Seriously, Optimus and Megatron fight for the first time and they use the "One shall stand, one shall fall" line, for their first battle seriously?

This series starts strong, but gets pretty stupid past the issue 4 mark, it's OK as a digital series, but not something I would like to make shelf space for.
It's just really annoying, the parts that are good a pretty good, but the parts that are bad are really f**king stupid, especially due to there being good parts.
Re: Transformers: Monstrosity #1 Preview (1496334)
Posted by Va'al on June 18th, 2013 @ 2:33pm CDT
To Be Continued
(Spoiler free-ish)

MEGATRON'S DESCENT! In the early days of the war on CYBERTRON, OPTIMUS PRIME puts everything on the line to unify the planet—but not everyone agrees that this new Prime should be in charge! Meanwhile, the fallen DECEPTICON leader, MEGATRON, begins a journey that will change everything. Plus—what is the terrible secret of the DINOBOTS?

In an unexpected, unless you read the solicits, twist, IDW have decided to release their digital-first series Monstrosity as a mini-series of four print issues, before issuing the paperback. The series picks up where Autocracy left, and features the same creative team at the helm: Metzen, Dille and Ramondelli.

As seems to be the norm by now in IDW Transformers, there are a number of plots running alongside each other in the same issue (which is, in fact, three digital releases): Megatron has been chucked onto Junkion by Scorponok, who now wants to be the big 'Con, Orion Pax Optimus Prime trying to assert his power as new 'Bot leader, and the Dynobots.. being the Dynobots.

Dai Atlas shows up, Scorponok is bad, Swindle is ..Swindle and there's quite the rounded cast to the whole set-up. Maybe a little too big, at times. There's a sense of wanting to include a lot material in a really short type of publication, and in some aspects, that can detract from the overall enjoyment. So far, I am not blown away by the story. Megatron sometimes borrows some elements (as I see it) from the live-action films, and that is not a value judgement, at all. But he is not particularly original, and I have a bad feeling he may become tiresomely 'tough-bad-guy'. We'll see.

In terms of art, we've all come to know Livio Ramondelli's work, and I think he has definitely improved his technique: where he used to shine particularly in wide shots and splash pages, he now packs a mean punch in terms of close-ups too! The monstrous aspect of some of the characters also works really well with his style.

And I mean close-ups

In terms of colours, it's Ramondelli working on his own, and yes, he does know how to colour. Quite nicely, too. And I am really really happy to see Tom B. Long on lettering here too! He works really well with the art style, and adds some really good soundwords to fight scenes.

So the art is pretty good, the colours are amazing, some of the wideshots are absolutely stunning, the lettering makes stuff really pop. Yes, artistically, this is a good issue. My minor pick is with smiles on some of the characters, that can look a little out of place at times, but it is a minor pick!

There you have it. Artistically, I have very few complaints, and it all looks brilliant. I do, however, have some issues with the story, especially in terms of Megatron's characterisation. I will be looking out for how his story develops from the next issue, and it will hopefully pick up again - there's so much interesting potential in the character. All in all, this is an enjoyable if predictable issue, and I believe it has to live with its predecessor Autocracy and the two current ongoings - especially seeing as it comes out together with the highly well-received More Than Meets The Eye. It's worth a read, definitely, as there are some nice surprises going on in there, and I'm interested to see where they'll be taken.

The Dynobots also get really annoying to the point that I facepalm every time their story reveals more about them.

You are a master of conveying thoughts with minimal dialogue, Va'al.

You are a master of conveying thoughts with minimal dialogue, Va'al.

I'm waiting for the full TPB on this one, but I'm glad Scorponok is getting some fiction, because he's been out of circulation way too long in the IDW canon.