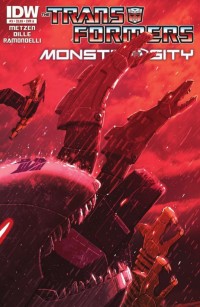 And thanks again to IDW Publishing, here's the second preview for next week: the penultimate print issue of Monstrosity! The digital-first series ended last week, but here's a chance to read it on glossy paper. Check out the preview below.

Transformers: Monstrosity #3 (of 4)
Chris Metzen & Flint Dille (w) • Livio Ramondelli (a) • Ramondelli x 3 (c)
MEGATRON UNCHAINED! In the early days of the war, MEGATRON—exiled on JUNKION—battles to reclaim the throne of CYBERTRON. But the TERRORCONS have other ideas… Meanwhile, GRIMLOCK and the DINOBOTS threaten OPTIMUS PRIME’s fledgling republic!
*3 regular covers will be shipped in a 1-to-1-to-1 ratio
FC • 32 pages • $3.99 "Your vile spark will provide me with all the power I need..."

Blot and Rippersnapper's dialogue bubbles are pointing at the wrong characters, aren't they? Since this issue's coming out this week, then it might not be fixable until it's reprinted in a trade.
Re: Transformers: Monstrosity #3 (of 4) Preview (1509737)
Posted by Va'al on August 6th, 2013 @ 10:17am CDT
R-Argh
(Spoiler free-ish)

MEGATRON UNCHAINED! In the early days of the war, MEGATRON—exiled on JUNKION—battles to reclaim the throne of CYBERTRON. But the TERRORCONS have other ideas… Meanwhile, GRIMLOCK and the DINOBOTS threaten OPTIMUS PRIME’s fledgling republic!

Story
This is the penultimate issue of the digital-first series, being released as four prints before they're collected in the trade. The actual series ended just a couple of weeks back, so this review may not come as news to all readers! We're dealing with Megatron 'surviving' on Junkion, Optimus struggling on Cybertron and the Dynobots kind of thrown in for good measure, with Scorponok gloating in the background.

And these two, helping to recap

The three main plots are still standing, though the Megatron story is getting repetitive and I have no idea what it's trying to lead up to at this point. Optimus' dealings with the population of Cybertron trying to escape is worked out a little better, but it's the giant monster in the basement that is clearly supposed to be the kicker.

The rest of the story is a bit lacklustre, with some not particularly good dialogue. Scorponok and Megatron suffer from Bond-villain syndrome, and Pentius has some very weird moments. Optimus manages to save himself at times, and Grimlock has some good moments too, but not enough to make up for the rest, even in light of his own sub-plot. What, no Star Trek quotes?

The multiple plots do seem to be reaching a touching point, if anything, and it looks like issue 4 will have a lot to deal with in terms of storylines and loose ends. I am quite curious to see how they will be executed, and am hoping for something a little better than this issue.

As much as Ramondelli's work has improved, massively, since early work, and I really enjoyed it in issues 1 and 2, this one has too much going on to be able to figure out the actual happenings, at times. Megatron's battle with the Terrorcons is a big mess of faces and smoked colours, unfortunately, and there are some bad perspective issues here and there. A bad case of rubber nosecone

Where Ramondelli does shine is in organic-looking and big creatures - and we get some of that here. What I'm also a big fan of, once again, is the letter work by Long and Lee, which adds to the 'monstrous' concept of the overall story, and is terribly enjoyable.

It's a shame to see the artwork slipping after two fairly successful issues, and now that we're this close to the end. Unfortunately, it can't do much to pick up the story either, and there are some errors in speech-bubble placing that further hinder full enjoyment.

So yes, the third issue does not strike as well as the previous two, even with some good shots of Grimlock's problem (and an explanation!) and the final creature from the deep. Megatron's plot is apparently solved, though I feel we haven't gained that much from it except for some bashing and a cape. I am curious to see how it will end, if there'll be some more reasoning behind Megatron and Scorponok's actions,