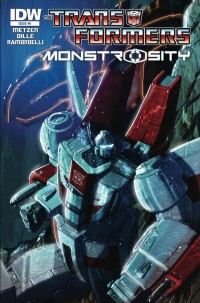 The official Transformers Facebook page has posted an interview with Autocracy, and now Monstrosity, artist Livio Ramondelli, to promote the release of issue 6 of the digital-first series, available today! Read the interview below, and find out how to get your copy.


TRANSFORMERS:MONSTROSITY #6 - the digital-first comic book from IDW Publishing and Hasbro is ready for download! In the early days of the Autobot/Decepticon war, a secretbelow the ruins of Cyberton may bring deliverence… but will it end theDinobots. Chris Metzen and Flint Dille write this mind-shattering sequel to last year’s hit TRANSFORMERS: AUTOCRACY, and now we sit down with superstar artist Livio Ramondeli to talk about this 8-page, 99¢ comic - available now at https://transformers.comixology.com/ or via the Comixology and iBooks apps on your computer or mobile device! Q: Is the way you’re working on pages for MONSTROSITY changed at all from when you did AUTOCRACY last year?

LIVIO RAMONDELLI: It’s a sort of constant evolution, but I’m not doing anything intentionally different than AUTOCRACY. I’m just trying to make the art look better and better, as well as clearer. I’m always trying new little things here and there to really pop highlights on the characters, and make the images brighter in general. Even when dealing with dark shadows.

Q: It’s clear you sure like playing with light and colors on your pages. Was this something you taught yourself or something you learned at school?

LIVIO RAMONDELLI: Definitely both. I studied color in school, but I spend more time thinking about it now. I’m always looking for new ways to balance out the colors and play with light. It’s tricky with TRANSFORMERS because they’re so bright, and you’re always fighting pages looking like clashing colors. Sometimes it works better than others.

Q: How much leeway does the script give you — do you follow what’s on the script page, or do what you feel is best to make it work?

LIVIO RAMONDELLI: The scripts always call for specific shots, but the page layouts (and the size of the panels) is my call. Also Chris and Flint are great at letting me change things when I feel like something might work better. I’m always looking to make each shot important, and so I’ll sometimes cut out panels that I feel we can cover in a line of dialogue and that gives us the space for more money shots. For example, in MONSTROSITY #5 we initially saw a couple panels of Scorponok and Blitzwing about to blast the door open to the refinery. But I suggested that we just show the door exploding, which gave us a cool reveal, more space, and didn’t cost us anything since your mind fills in what came before.

Q: In this issue, we hear about a sixth member of the Dynobots team — Skar. Was it a surprise to see this new character appear and how much did you enjoy the process of designing this previously unseen team member?

LIVIO RAMONDELLI: It was tricky, because you’re adding something to a classic group of characters and trying to make it feel natural, which is always hard. At first I actually designed Skar to look closer to Swoop (since Swoop tends to stand out differently from the other Dinobots, and it made sense to me that another would look like him). But it was Chris’s desire to really see Skar as Grimlock’s close friend as well as resemble him a bit physically. Like he could have been as strong as Grimlock, and tragically didn’t make it. So he ended up being a bit of a cross between Grimlock and Swoop — his head has some Swoop elements to it. I wasn’t surprised by the reveal as I knew from the beginning of the story Skar would appear. It was just a question of hopefully making it natural.