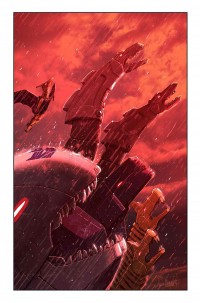 From the deviantART page of artist Livio Ramondelli we have the cover art for IDW's digital format comic Transformers: Monstrosity issue #7. As you can see in the image mirrored below the cover features his take on the Terrorcons.

I hear good things about the series, and Ramondelli is cleaning up his artwork apparently. I'm sure we'll see more of that in RiD in a couple of weeks, though.

Re: Transformers: Monstrosity #7 Cover Art Revealed (1486257)
Posted by Noideaforaname on May 10th, 2013 @ 6:35pm CDT
For some reason I can't help but think of the Johnny Bravo skit where turkeys (and Johnny himself) stare up at rain with their mouths agape until they drown.


Add To Wish List
Preview the inside of this book
Transformers: Monstrosity #7 (of 12)
12 CHAPTER DIGITAL EXCLUSIVE SERIES! BATTLE OF JUNKION! MEGATRON is under attack-by his own Decepticons! With everything at stake, he makes a fateful decision --and brutal final combat ensues!

Q:We’re halfway through MONSTROSITY. The first series that you worked on withChris Metzen and Flint Dille, AUTOCRACY, focused on Orion Pax becoming OptimusPrime. Why did the focus was shift to Megatron and what happens to him, whileshowing bits and pieces of Prime on Cybertron?

LIVIO RAMONDELLI: Itfelt like a natural progression in the story to shift things a bit more toMegatron’s story. He suffered a big defeat at the end of AUTOCRACY, and soseeing how his followers respond to that interested us. Plus, we wanted tocontrast that against Prime having a more political battle ahead of him, andshowing the hardships of leadership for a divided world.

Q:Megatron has obviously suffered prior to the series and gone through a littleredesign? How did you come to the design we see him in now?

LIVIO RAMONDELLI: Weknew that he’d repair himself with pieces he’d scavenged on Junkion, and so wedefinitely wanted him to be asymmetrical. By the end of his time on that world,he’s almost unrecognizable as Megatron… his colors have rusted and hisDecepticon logo has burned away. He really needs to find himself once again,essentially.

Q:There have been a few new characters making themselves know so far in theseries. What led to those characters coming into the series rather than others?Are any of them you just wanted to see in there?

LIVIO RAMONDELLI: Absolutely.Trypticon, Sharkticons and Quintessons were the ones I most wanted to include.I felt like they lent themselves well to the story we wanted to tell, and theyadded a more monstrous side. We knew they’d be in there from way early on. Andthen others like Dai Atlas and Bulkhead grew organically from the story, wherewe felt like we had a place for them that also felt natural.

LIVIO RAMONDELLI: Ithink they’re a very classic part of the TF universe. Funny enough, they’re allover the place now in the various games and the TV shows, but when we firstdecided to use them they weren’t really around. And as Chris said it, MONSTROSITYis about a man becoming a monster (Megatron), and a monster becoming a man(Grimlock). I always loved that.

Q:We have the Quintessons making their first real appearance in the IDW universe,after being previously teased at the end of SPOTLIGHT: WHEELIE in 2008. Was thisa deliberate nod to the 1986 TRANSFORMERS animated movie (after the nods we sawin AUTOCRACY)?
LIVIO RAMONDELLI: Nota deliberate nod, exactly, since we use the Quintession Pentius in a verydifferent way, here. Though, of course, we drew from the movie since, visually,we felt there were some great things we could do that hadn’t been seen in [the IDWcomics] before. And we wanted to certainly tease the Quintessons without givingtoo much information about their race… certainly leaving more to be revealedabout them in future stories.

Q:Taking into account what you established in Autocracy, was there much researchthat had to be done about Megatron to see what was already established abouthim in the IDW world so you could figure him out?

LIVIO RAMONDELLI: MEGATRON:ORIGIN is a big favorite of mine, and so I knew a lot of his history prettywell. And then of course James wrote the great “Chaos Theory,” which furtheradded to it. Our take on him is meant to reflect those but also portray him asincreasingly dangerous… a truly growing threat. [Editor] John [Barber] is greatat jumping in and suggesting things or filling us in on some continuity we mayhave missed.

Q:With Dai Atlas, he has some backstory in the IDW universe, but also some gaps.When figuring out his role in this story, do you think it was the intention toshow he was more than we previously may have thought? He’s proven to be a hellof a fighter.

LIVIO RAMONDELLI: Wecertainly wanted to shed more light on him. And also, TRANSFORMERS: ROBOTS INDISGUISE #17 that I did with John [also on sale today!] will also give us bigmoments with him in the past. I think he was perfect to use in this prequelbecause we know he left Cybertron… and now we get to see the why and how of it.And there’s a sadness to seeing him and Prime trying to work things out becausewe know it doesn’t succeed. Their final moment together in Monstrosity is anemotional favorite of mine.

Q:Given that you worked with Flint and Chris before, has the creative processbeen any smoother for you all this time around, now you know how each otherbetter?

LIVIO RAMONDELLI: We’remuch closer just as friends by this point. In AUTOCRACY, it was really theirstory and I was coming in to draw it. But they embraced me warmly, and let mereally suggest a lot of stuff… it was the most fun I’ve ever had in my career.And now with this current series, it’s only gotten better. It’s a truecollaboration and I feel very much a part of the story. Chris and Flint areawesome guys, and I’m very thankful for their generosity and friendship.

Q:What is your favorite stage of the creative process when putting the seriestogether?

LIVIO RAMONDELLI: There’sa few… I love the early stages of just chatting about any insane idea andseeing if we can connect the dots. I also love when the issues start coming outand the reader responses arrive. And then finally finishing a series is a veryrewarding moment since you know that story will live on forever and hopefullybe passed around to new readers.

Q:Would you say working in a digital format, with less page space than a regularcomic, is a plus or a minus point for both you?

LIVIO RAMONDELLI: It’sboth. Certainly, there are times it can be a minus because you want to do bigmoney shots and sometimes don’t have the space. But as a plus, it makes usreally concentrate on the screen time and make every moment count. As a result,I think the pacing in these issues feels very fulfilling… we cover a lot ofstory and readers seem to really love that.

Q:Tease us about future issues of MONSTROSITY. What would you like to say aboutthe series to anyone looking to pick it up for the first time?

LIVIO RAMONDELLI: Obviously,the revelation that Trypticon has been discovered is a huge clue for the restof the series. We wouldn’t show something like that and have it not wake up.And we’re aiming for a level of destruction with Trypticon that hasn’t beenseen before. Optimus Prime will really be put to the test, as he has beenthroughout the series. Megatron will of course return to deal with his betrayalat Scorponok’s hands… and he isn’t the merciful kind.

And for anyone who hasn’t read ityet… I’d say it’s the story of a world coming apart at the seams, showing how asociety can destroy everything they love and not even be fully aware of it.

Q:Can you see the story that you’re telling branching out even further into thewar, maybe offering up a third digital series after this one?

LIVIO RAMONDELLI: Withoutsaying too much… I think there’s a very good possibility…

Huh, now that you mention it, it really does look like a hand.

I saw that too, and it made me think of Abominus

Re: Transformers: Monstrosity #7 Cover Art Revealed (1489524)
Posted by Henry921 on May 23rd, 2013 @ 2:39am CDT
Another prequel story? While I did love Autocracy and am enjoying this one so far, I think the continuity's become a bit bloated with all these trips through the timeline.

After we get Shockwave's backstory, how much more prequel do we really need?
Click here to view additional comments about this topic at the Energon Pub Forums ...