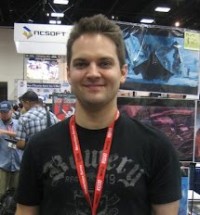 ServoSlag has posted an interview with the artist of IDW's digital format series Transformers: Monstrosity, Livio Ramondelli. He discusses the pro and cons of working on a digital series, continuity, Dinobots, Quintessons, and more. The full interview can be viewed by clicking here.

ServoSlag: The last time we saw a Quintesson was at the end of Spotlight Wheelie. How does Pentius play into that thread or is that a story for another time?

Livio Ramondelli: It's been a long time coming to seeing a true Quintesson in IDW. Pentius isn't necessarily tied to the tease we got in Spotlight:Wheelie. We give a few more clues about the Quintesson race from what Pentius says and does, but we definitely wanted to leave a lot more open to explore. The scene when Megatron returns after being dragged beneath an acidic sea by Sharkticons, for example, hints at a major thing the Quintessons are capable of.

ServoSlag: How does the Shockwave Spotlight issue work in this same universe? It looked like the Dinobots got their "dino" alt modes (somewhat) in that series, but it looks like something similar might be happening with them in this book.

Livio Ramondelli: We did our best not to contradict Spotlight:Shockwave. The Dinobots do get Dinosaur Alt-Modes in that issue..whereas in Monstrosity they are more 'infected' with something that causes them to manifest beastly forms. In my mind, it's different. They're in control of their Dino modes in a way that they aren't in Monstrosity. It basically came down to us wanting to have the Dinobots in our story and wanting them to resemble in some way classic Dinobots. We didn't want them to turn into tanks or cars. But we hope our story doesn't feel like it contradicts them getting Dinosaur alt-modes millions of years later.