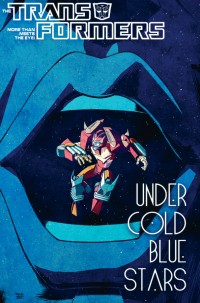 IDW's talented cover colorist Josh Burcham has shared his and Nick Roche's alternate cover for this month's upcoming issue, Transformers: More Than Meets The Eye #15. The cover features the captain of the Lost Light nearly being engulfed by a certain Phase-Sixer. With the release of MTMTE #14 in the rear view mirror, and MTMTE #15 goodies in this cover, the recently leaked preview, and the likelihood that this issue will actually be released on the week of March 20th - the month of March looks to be a treat for MTMTE fans! 
James Roberts wrote:What? MTMTE #15 is out next Wednesday, you say? Really? Well I never. It seems like only a fortnight ago I was trying to whet your appetite with regards to issue #14.

As most of us know, the new issue contains a story called "Under Cold Blue Stars", which is lifted from a Josh Rouse song. The song's really nice, but has nothing to do with the contents of the issue beyond the fact that, y'know, the battle takes place, um, under some stars.

For a long, long time this story was going to be called "Are You Ready To Be Heartbroken?", after a fantastic song by Lloyd Cole and the Commotions, and much as I like the idea of interrogative story titles, it was too meta (and it would have made me sound very presumptuous and you'd have wanted to pelt me with bricks).

"First of the Gang to Die" (a Morrissey song) was another contender. I do come up with my own titles sometimes, you know. Anyway, I've posted a link to the Moz track on my Twitter account and I think it's been added to the ever-expanding MTMTE soundtrack thread.

The two songs I have for this issue are:

This is a cover of great Nick Cave song. I'm posting it because of the heat and passion and anguish, rather than the (phenomenally good) lyrics.

And here's a more traditional rabble-rouser:

Here is this month's dialog snippet:

"I really don't know if I can forgive you for this."

One last thing: I plan MTMTE out very carefully, and have done since the start. You know, grand plans and all that. In this issue, for the first time, and in connection with a certain character, I changed the grand plan. When the dust settles, and assuming you're still talking to me, and assuming people want to know, I'll spill the beans.

See you next month for the aftermath.