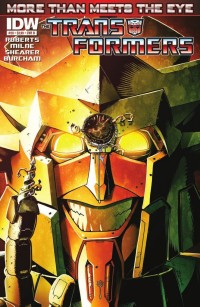 NOWHERE TO RUN! The end is nigh for the surviving members of the Lost Light crew, as enemies old and new move in for the kill. But on the fringes of known space, an ancient visionary is about to eliminate the Cybertronian race with a wave of his hand. Story
We're almost there - this is the fourth part of the five-issue-long Remain in Light story arc. And more answers unfold as questions remain, with Dai Atlas, Whirl and "his friend" Cyclonus fighting on the field and Rodimus-not-Hot-Rod and the Lost Light crew facing Tyrest and his plan. Last issue we were introduced to the character of Getaway, linked to Skids, and part of the latter's previous, forgotten life. This issue, Roberts uses the new Autobot to expand on Skids' actions, his gun and other secrets, as part of the so-called Diplomatic Corps. With a dig at the Wreckers, why not

But let's not forget about Ratchet and First Aid, apparently still dealing with Ambulon's halved body. I'm still unsure about Ratchet's characterisation in the title, especially of late - though his actions in here are surprisingly, well, surprising; in my books, First Aid has some better ideas, placing and even dialogue lines. And he speaks his mind

Getaway is cursed with the info-dump qualities -bomp- for Skids' story, but is likeable enough that readers can get over it. At the same -bomp- time, he also becomes a robot mcGuyver with a -bomp- trope looming over his head. Still, as I said, likeable.

I will do my best not to gush out at the artwork in this one, but bear with me if I do. Milne works his usual amazingness on pencils, and inks some pages along with Brian Shearer to. Expressive mouthplates will always pleasantly surprise me. And there's a nice show of the whole cast from the entire universe at some point, really well executed.

But no spoilers, so have some gore

And the colours. The colours. Josh Burcham does justice as ever to Milne and Shearer's work, but in addition to that, he's helped this time by ReGen One's crayon holder John-Paul Bove - can you spot the differences? He 'Burchamed the living daylights' out of those lines (sic).

Tom B. Long is still absolutely amazing at lettering too
Special mention also to Nick Roche's B cover, with a truly terrifying close-up of Tyrest. Roberts really does like his psycho-villains, hm?

Highly enjoyable issue, with some excellent resolutions to some questions and situations set up so far (even though they essentially all show up in the form of Bomp McGuyver), and a couple of more questions still unsolved. Tyrest is still a bit of a Bond-esque villain, and we've seen very little of Pharma this time round, but still a good read. And will Tailgate's fate be what we/I think it will? Artistically, it's a glorious piece of work, with some amazing colours from both Burcham and Bove, nice inking from Milne and Shearer, and the always amazing lettering by Long. Definitely pick this one up, and wait with all of us for the conclusion next month, before Dark Cybertron begins.

Roberts has Tyrest in the wrong book. If he wants to kill knockoffs then he needs to go over to RID and take out that hideous upcoming Armada Starscream. Strangely, I find myself liking this Getaway character already, even though he is from a year when just about every TF on the checklist was either pure crap or confused about what alt-mode is supposed to match with their faction. Getaway stays true to his faction by being a car, and he has an original bio that Roberts is actually going to stick with! If Getaway is indicative of the second wave of characters that James is going to introduce, then I think the mountains of criticism he has received over his poor choice of characters has finally set him straight.
Re: Transformers: More Than Meets The Eye #20 Review (1514233)
Posted by 1984forever on August 27th, 2013 @ 7:45am CDT

84nevermore wrote:OMG! I hate this comic! Too many words make my head ache! Why can't they go back to all the awesome PEW PEW shooting and easily digestable stories of the good ol' GEEWUN stuff! Roberts is a sharlatan, while Shane McCarthy EXACTLY knew how to keep things sweet and simple! Transformers doesn't need three dimensional and relatable characters, it needs monosyllabic mottos and avantgarde animation errors! CURSE YOU, ROBERTS!!!

Hey, they never used that word charlatan on the Sunbow cartoon! I'm calling you out as a fraud 84nevermore! G1 Sunbow words only!
Re: Transformers: More Than Meets The Eye #20 Review (1514254)
Posted by sabrigami on August 27th, 2013 @ 10:32am CDT
I'm going to do my best to get a copy of this tomorrow from my lcs. I hope it's not delayed

From what I read from the preview, I like the fact the Ratchet is falling apart. Good on First Aid for calling a spade a spade too. If it wasn't for ratchet's ego Ambulon wouldn't be lying "half" dead on the floor (sorry. that was terrible) Another excellent review to get me pumped. So glad you were around to do the review Va'al. Not the same without you.
Re: Transformers: More Than Meets The Eye #20 Review (1514402)
Posted by 84nevermore on August 28th, 2013 @ 4:46am CDT
@84forever:

By Primu... uh, I mean, Primacron, you're right! I have sinned! Must repent!

Don't blame me for having such an unnecessarily bloated, ugly vocabulary! If I had the talents of Shane or the Sunbow guys, I'd be doing my TRUE and HONEST GEEWUN continuation catroon by now. Instead, my only option is to be like Roberts and try to disguise my chronic logorrhea as "writing." I know that hiding behind grand but ultiamtely empty words is not the Sunbow way, but hey, at least I've misspelt "charlatan!"
Re: Transformers: More Than Meets The Eye #20 Review (1514455)
Posted by ARCTrooperAlpha on August 28th, 2013 @ 11:16am CDT
Hey'all, did James ever explained why Star Saber is such a religious nut ? I know about his TMUK depiction, but why make Star Saber a "bad guy" ?
Re: Transformers: More Than Meets The Eye #20 Review (1514514)
Posted by Hypershock on August 28th, 2013 @ 3:19pm CDT

ARCTrooperAlpha wrote:Hey'all, did James ever explained why Star Saber is such a religious nut ? I know about his TMUK depiction, but why make Star Saber a "bad guy" ?

Not to my knowledge. I kinda wanted him to be an armored smaller guy like Ultra Magnus turned out to be, but i don't really mind it this way. A toy is needed, however.

The weak point of this book was Soundwave showing so much emotion over Ravage. It has been well established that Soundwave views his minions as tools, and the only emotion he'll ever show is anger towards the individual that tries to break one of those tools.
Re: Transformers: More Than Meets The Eye #20 Review (1514833)
Posted by Va'al on August 30th, 2013 @ 6:37am CDT
Wait... you liked something from MTMTE?

Re: Transformers: More Than Meets The Eye #20 Review (1515015)
Posted by craggy on August 31st, 2013 @ 8:17pm CDT
the latest Twincast's theory on the new Magnus blew my mind and made perfect sense. I hadn't even been thinking about who would replace him. If Star Saber turns out the same, I could see Drift ending up the new one, or maybe Cyclonus.