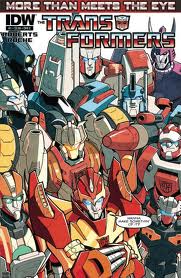 I would like to start this review by addressing the artwork. Nick Roche and Josh Burcham have a wonderful and dynamic style. It brings glimmers of the gritty style from LSOTW which is, personally, a good thing. I'm sure people will be divided on some of the character designs which seem to mesh several iterations together. A more animated styled Rodimus and War for Cybertron Bumblebee look better together than I would have envisioned. With that being said:

I have recently had the privilege of reading IDW's More Than Meets the Eye issue 1, and I have to say WOW. The plot continues from the stand alone issue: The Death of Optimus Prime. The story so far: the war between the Autobots and the Decepticons is over, and after the matrix is used to purge its polluted core, the planet Cybertron reverts to a primordial state and sends a message to thousands of non-affiliated transformers: “come home”. The planet is once again teeming with life and chaos. As the newly appointed leader of the Autobots, Bumblebee must manage a populace that not only despise the Great War, but its warriors, Autobot and Decepticon alike. The planet is now inhabited by former enemies and civil unrest over an "illegal occupation of Cybertron" by the Autobots, and the political scene is set.

The ranks of the surviving Autobots has been tremulously split by the decision to stake out into the galaxy in search of The Knights of Cybertron. The brash revolutionary Rodimus, has convinced 208 Autobots that their time as warriors is over. That their sacrifice has been made and that it is time to seek out glory that has been lost. Promises of Cyberutopia and the ancient Knights of Cybertron are enough to convince many former Autobot warriors to join the crew of The Lost Light.

Included in this exodus are familiar faces, like Ratchet, the Autobots Chief Medical Officer. Finding no fit time to inform Bumblebee of his decision to leave, it is during the autopsy of a "Burning-Monk" protestor that Ratchet confides in Bumblebee the truth of his aging. Bearing witness to a being who transformed himself for weeks, constantly, until it killed itself, Ratchet admits he, like so many warriors, are aged, and tired. Being war torn for countless cycles, Ratchet has decided to join the Lost Light in hopes of not only repairing lost Cybertronians, but in hopes of finding his replacement - a new medic to take up his title. One by one, Autobots board the Lost Light. Bumblebee and Prowl find themselves bitterly watching the launch. The crew includes Ultra Magnus, Drift, Chromedome Brainstorm and many more Cybertronian patriots. This ill fated ship, The Lost Light, takes on their first three injured 'bots even before launch, when Chromedome, Ratchet and Rewind stumble across an encounter between Whirl and Cyclonus! Unbeknownst to them, the brawl between ancient enemies erupted from a case of mistaken identity. Cyclonus, who appears to embrace the peace between the two factions, detects a very familiar energy signature, belonging to Scourge. As he pauses from his flight, he discovers something very strange. Twisted in the style that Roche and Roberts established in Last Stand of the Wreckers, Whirl, the exiled Wrecker, is found talking sweetly and openly to the spark fragment of one of the Sweeps. In a demented desecration, Cyclonus finds himself invading Whirls private world. Enraged, the former Wrecker pursues Cyclonus, all the while ignoring his pleads for peace. Shortly after Cyclonus attempts to defends himself, he his slammed to the ground, offline, with his aggressor ready to finish him off. This is where Ratchet and the others discover the brutally one sided conflict and attempt to step in. Whirl has lost his connection to reality. He is mad and aims to confront those who intervene, when up from the ground, comes an explosion. Poor little Tailgate had fallen through unstable ground trying to reach the Lost Light before take off. The fall disabled him from moving, so he decided that an energon explosion might help his chances of rescue. In a behavior I would not have expected, Prowl and Bumblebee have plotted some sort of interference for the crew of the adventure ship. An explosion immediately after take-off hurtles the doomed ship through space and time, tearing the ship open. Many Autobots are hurled into space. A nearby remote planet is chosen to set down onto to make repairs and to begin retrieving the lost crew members. Rodimus is only in the very beginnings of his great quest and he faces the hardships of leadership and loss once again.

At the end of the book, is a series of cryptic, and static filled messages. Warning of future shortcomings and wrong decisions made by the leader and crew of the Lost Light. With no indication that the message was received, it may not have mattered at all.

This series is set to run parallel with fast approaching, Robots in Disguise. MTMTE will continue to follow Rodimus and the crew of the Lost Light. While RID will transcribe the on-goings of Cybertron and the civil unrest and intrigue that besets the remaining Autobots and their new leader, Bumblebee. Both series are years in the making as they continue the story of Generation One by bringing us to the end of the war. The return to Cybertron. And it is not the golden paradise one might have imagined. Rather, it is an unstable place with a new government and a mass of inhabitants that know very little of the struggle. The stage is set for political blowout in a post war world full of former enemies and new threats!

In conclusion: awesome. I have come to expect nothing less. This series my not be for everyone, however, I found it appropriately politically charged. Given the election and the US troop draw down, the book seems to emulate much of our current society. It also had several references for you G1 fans.

funeralthirst7 wrote:The story is fantastic. I can't wait to read the next issue. But I still have a hard time with the artwork. While a lot of it is excellent I still don't like the skinny, chicken legged Transformers. Chromedome is especially weak looking, with his lack of a waist and toothpick legs.

I'm a BIG fan of Roche's stuff, but I like the exaggerated looks and you can get a lot of expressions from his bots. But for those that don't like his look, Alex Milne will be taking over the duties of MTMTE for now. And if I can't have Nick, I'm glad that it's Alex's stuff because he has definitely improved a lot.
Re: Transformers More Than Meets The Eye Issue #1 Review (1336026)
Posted by gothsaurus on January 20th, 2012 @ 8:27am CST
Yeah, the changes to the characters art style is so drastic... it's almost like they stuck a head on a different character. Like an ill-conceived convention exclusive that's a stretch.

I'm also not a fan of the skull-face Cyclonus... or chicken legs.

These changes, plus personality changes in characters, have turned me off enough to cancel all my subscriptions. With two new comics starting, I'll check things out again... but seeing these, I'm not hopeful of starting up again.

Just a couple of things I think you missed.

Ratchet's work on the NAIL protester wasn't an autopsy, he had been trying to save him and failed. Which is why he was frustrated.

Just a couple of things I think you missed.

Ratchet's work on the NAIL protester wasn't an autopsy, he had been trying to save him and failed. Which is why he was frustrated.

Man you are totally right. I just went back and checked. Well, The Tailgate thing is correct. And however Ratchet did try and save the suicide bot, BumbleBee had entered the "Autopsy Room" and would accept a verdict of suicide if it came from Ratchet. So it was, kinda the autopsy of the Being. The Tailgate thing, TOTALLY MISSED THAT. I will make some changes.
Re: Transformers More Than Meets The Eye Issue #1 Review (1336048)
Posted by gothsaurus on January 20th, 2012 @ 9:21am CST
I'm going to have to check this out... simply for the plot. Much as I hate the exaggerated, kinda silly, emaciated character designs... I am intrigued by the story.
Re: Transformers More Than Meets The Eye Issue #1 Review (1336170)
Posted by morphobots on January 20th, 2012 @ 1:29pm CST
Roberts says in the open letter to readers at the end of the story that the creative team will be making the series like Lost meets Arrested Development meets Star Trek meets Justice League International. That may be biting off a lot, but I already see many of those elements in this first issue. Even variant cover "E" is an homage to the old JLI reboot issue. Hopefully the writing will be able to stay up the the challenge. My only real problem right now is, even with all the development over the last year, Prowl's use of the bomb still seems really out of character to me. Like he's crossing the line into zealotry. On the other hand, real-life veterans often have enormous difficulty returning to an environment without war, so that could be something in play here (page 7 comment about continuing to fight).
Re: Transformers More Than Meets The Eye Issue #1 Review (1336246)
Posted by Windsweeper on January 20th, 2012 @ 4:24pm CST
Read it the other day and even got it signed by Mr.Roche that very day. Really enjoyed it. The only problem I have is the 6 million year thing with Tailgate. Just seems ridiculously long. Perhaps had he been in stasis lock and recently awakened...

One thing I liked in the earlier IDW books was that the bots only seemed to be thousands of years old.

Originally, I felt IDW changed characters too much but these days I like what they've done with Prowl and Arcee. Whirl and Swerve look like they'll be fun.

Overall, it's very enjoyable and I look forward to reading more.