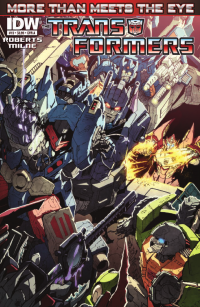 Our friends at IDW Publishing have provided us with the preview for Transformers: More Than Meets The Eye Ongoing #15. Be sure to pick up or download the next exciting chapter in the saga of the Lost Light and crew this Wednesday. Full review coming soon, for now enjoy the preview below.

Transformers: More Than Meets The Eye #15
James Roberts (w) • Alex Milne (a) • Milne, Nick Roche (c)
DEATH IN THE RANKS! Rodimus and his crew are confronted by the enemy within—and not everyone will survive the encounter. Everything has been building to this: all-out war aboard the Lost Light!
*2 regular covers will be shipped in a 1-to-1 ratio

Bullet points:
• No one is safe!
• The story that More Than Meets The Eye has been building to since issue one is here!

Holy cow Batman!!
It's starting. The intensity is over 9000!

This is it, it hit the fan for the lost light.

Super Megatron wrote:Overlord kicks so much ass that you can feel it in the pages of the X-Men.

PrymeStriker wrote:I don't read MTMTE, Va'al brought me here after he alluded to this, but...

Glad I'm not the only one.

PrymeStriker wrote:I don't read MTMTE, Va'al brought me here after he alluded to this, but...

The DJD need to turn up so we can have a Phase sixer versus phase sixer showdown.

DEATH IN THE RANKS! Rodimus and his crew are confronted by the enemy within—and not everyone will survive the encounter. Everything has been building to this: all-out war aboard the Lost Light!

Pipes and his ability for synthesis

We know what's going to happen – Overlord has escaped, a massacre is imminent. Roberts, though, approaches the inevitable scenes cautiously, craftily building up those thirty minutes which Chromedome needs to exit the cell. Well, sort of. He kills someone off, then gets back to the build-up.

Crushing your feelings (and other bots) since 2010

The inhabitants of the Lost Light are still carrying on their own personal storylines as the storm hits. A lot is happening in those thirty minutes, and Roberts makes sure we are all left waiting to find out what was going on befor-- AWOOOOOGA.

The entire crew reverses to the Medibay to stop the Phase Sixer. And I mean the entire crew. Every shape serves a purpose. There are, of course, notable exceptions: Ultra Magnus makes quite the comeback from his so-far obsessive self, readers will be pleased to see. And both him and Fort Max are pivotal to the issue (and what is that blueprint in Brainstorm's lab?).

Ultra Magnus is dealing with it now

The humour typical of Roberts' stories so far is still present, before the big fight scenes and even during, but they really don't detract from the action or the tension. If anything, they add an extra layer of 'humanity' to the entire crew, leaving readers completely at loss towards the end. This reader, at least. Swerve is, as usual, the comedy relief, and while a lot of the humour does happen before the battle scenes, he pops up again mid-fight, fulfilling his role. A nice touch of referential comedy on Roberts' behalf, too.

Milne provides the pencils, but EVERYONE ELSE is working on inks and colours. Seriously. Marc Deering, Brian Shearer and Phyllis Novin collaborate with Milne on the inks, and the three Js (Burcham, Perez and Lafuente) are on colours. And the effect is gorgeous.

The artwork conveys the scale of what is happening aboard the ship, and the colours have the task of adding the deeper emotional power of Roberts' script. The final panel, with no words, no borders, white background, delivers a wrenching, devastating blow to even the most tempered heart of steel. The last time I felt this emotional about a comic was with Craig Thompson's Blankets. A note on the lettering, too: in the most recent issues, Tom B. Long has taken Mowry and Lee's work further, finding his voice in playing with typography, and adding even more emotion to the lettering and fonts. Especially with pain and anger. There's a lot to say about someone who can write ARGH in a unique way each time.


One minor complaint – the Overlord situation seems to be dealt with pretty swiftly. I'm sure there is more to come, or I'd like to think that at least, but one issue to build up and one to climax the event feels a bit reductive.
But I suppose that is the price to pay to have such an emotional story be told in amidst all the action and fighting. And it is feelings that really leads the plot in the issue. Overlord is the cataclismic catalyst to Chromedome's tale, who is ultimately the real major character of Under Cold Blue Stars.
Alongside that, I hope that all the cut-off actions of the various crew members will be explored later in the series, revealing Tailgate's creation, Fort Max's apology, Perceptor and Rodimus' conversation about matrix mapping. Especially the latter.

To sum up, this issue is not for the weak-hearted, the emotionally-involved, the casual, the fan, the long-time and attentive reader. No, wait – this is precisely the right issue for you. If I were to choose my favourite issue from IDW so far, spanning all series, Under Cold Blue Stars would be it. It has action, humour, pain, deaths (at least four) and everything that has made More Than Meets the Eye such a good read since its inception.

(and for the first time, those Autobot symbols look like tiny hearts waiting to be shattered)
Re: Transformers: More Than Meets The Eye Ongoing #15 Preview (1472901)
Posted by The Collecter on March 19th, 2013 @ 3:23pm CDT
ROTFL, the forth wall "off-panel" joke was hillarios!

(although it would have been cool if they used it on Overlord and turned him into a SG decepticon thus making him a good guy)
Re: Transformers: More Than Meets The Eye Ongoing #15 Preview (1472902)
Posted by The Collecter on March 19th, 2013 @ 3:26pm CDT

Sorry to disapoint, but the fourth wall breaking already happened when Swerve said, "I did it off-panel"

Re: Transformers: More Than Meets The Eye Ongoing #15 Preview (1472905)
Posted by sabrigami on March 19th, 2013 @ 3:31pm CDT
Hmm, I don't know if my feels will survive this one. But I must be a Lady and face this anyway. Reading the Preview yesterday was very crushing (no pun inteneded). Not even the hilarity of the Meta fictional bomb and Swerve could ease the pain. I also made the mistake of listening to Lillium (elfen Lied) while reading the preview again. Tha made it even worse

On a brighter note, excellent review Va'al. You and Blurrz know how to make a nice exceedingly teasing but not spoilery review

Va'al wrote:There may or be not be more on that. I'm not committing to anything here.

This issue still blows my mind every time I read it

sabrigami wrote:On a brighter note, excellent review Va'al. You and Blurrz know how to make a nice exceedingly teasing but not spoilery review Re: Transformers: More Than Meets The Eye Ongoing #15 Preview (1472915)
Posted by gothsaurus on March 19th, 2013 @ 4:20pm CDT
I know it might be kinda weird to say... but besides the obvious Overlord, looking at the amazing double panel spread, I can't help really wanting a classics Skids. Am I crazy, or has he been looking particularly awesome in the stories as of late?