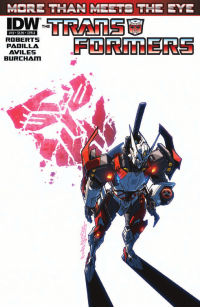 Thanks to our friends at IDW Publishing we have the preview for next week's Transformers: More Than Meets The Eye Ongoing #16. Be sure to pick up a copy at retail or download next Wednesday. Seibertron.com review will be posted Tuesday, stay tuned!

Transformers: More Than Meets the Eye #16
James Roberts (w) • Alex Milne (a) • Milne, Nick Roche (c)
AFTERMATH! The battle for the Lost Light is over. As the survivors bury the dead, one Autobot begins a secret journey that will change everything. This special issue marks the beginning of “Remain in Light”—the game-changing finale to the first More Than Meets The Eye mega-story arc!
*2 regular covers will be shipped in a 1-to-1 ratio

Bullet points:
Drift no more!
The calm before the storm—but on the starship Lost Light, nothing is ever very calm!
“Remain in Light” —the story everyone’s been waiting for—begins here!

*edit*Holy scrap. I just noticed the panel with Overlord. hard to tell if he's dead or not. probably not. Aren't they even going to investigate him or something. Even look for a sign of Rewind?
Re: Transformers: More Than Meets The Eye Ongoing #16 Preview (1480327)
Posted by Va'al on April 19th, 2013 @ 2:19pm CDT

sabrigami wrote:*edit*Holy scrap. I just noticed the panel with Overlord. hard to tell if he's dead or not. probably not. Aren't they even going to investigate him or something. Even look for a sign of Rewind?

It's just the first pages.

sabrigami wrote:*edit*Holy scrap. I just noticed the panel with Overlord. hard to tell if he's dead or not. probably not. Aren't they even going to investigate him or something. Even look for a sign of Rewind?

It's just the first pages.

true enough. just looks like they're flying away. It's also nice to see my other fave bot Rotorstorm get a cameo

budmaloney wrote:You can see Rewind's camera. Also If the first pages about Magnus's survival are foreshadowing, he'll live. Looking forward to this issue

Oh man it is his camera. how did I miss that too? That does not bode well

What does that mean? is it good?

And I've made sure it doesn't spoil anything this time, but just because I think the issue works really well without too many hints.
Re: Transformers: More Than Meets The Eye Ongoing #16 Preview (1481192)
Posted by Va'al on April 23rd, 2013 @ 9:34am CDT
The funeral issue
(Spoiler free-ish)

Disclaimer: while the review is relatively spoiler-free, the discussion in this thread may not be. If you do not want to ruin your reading experience, please do not read the comments until you've picked up the issue!

Synopsis
AFTERMATH! The battle for the Lost Light is over. As the survivors bury the dead, one Autobot begins a secret journey that will change everything. This special issue marks the beginning of “Remain in Light”—the game-changing finale to the first More Than Meets The Eye mega-story arc!

Aaaand we're up to speed

There's a definite lack of exclamation marks this issue, whatever the solicitation may say. Overlord and Rewind are dead (it seems), Ultra Magnus is dying (apparently), Rodimus, Chromedome and a lot more are hurt and hurting. Get your tissues out, there's some emotional stuff going on.

I'd say there are three main plots running through, with all the usual addenda. Rodimus having to deal with what has happened behind his back and yet right under his nose (try working that out, physically): I love the portrayal of him in this issue, I simply love it. He's furious and feels, justly, betrayed, while still trying to keep a level head as captain of the ship. Drift is complementary to this section, and quite rightly has not a lot of excuses to offer.

Ultra Magnus, on the operating table, with the Death Clock, surrounded by his 'friend' Swerve, Ratchet and Tailgate, who is having a real hard time keeping everything together. Somehow, Swerve's usual humour does not seem to work, and all of this issue is, fortunately, toned down. Tailgate, actually, gets some nice lines, and serves his function heartbreakingly well. (And those initial pages provide some rushed but good background to all his obsessions, too.)

Skids sure does talk a lot

Chromedome, trying to get over Rewind's death. There are some excellent moments here, unsurprisingly. The scenes with Skids outside the ship, hinting at the real ties between him and Rewind, the talk after the funeral revealing a big secret, the final pages. Especially towards the end, although a tad confusing in some frames.

Artist on board this time is Agustin Padilla, who has previously worked on the Rage of the Dinobots miniseries, with Jose Aviles on inks. While I do like the work overall, something does quite feel right in terms of proportions and scale, especially with the smaller bots like Tailgate and Swerve.

Someone went to the Hasbro masterclass on scale

Burcham's colours really are something. This issue is toned done, almost muted, in remembrance of the events from the previous one, and the colouring just makes sure we get the gravity of the situation. There isn't that much space for Long to play around with lettering, but the captions in the final sections of the issue are really well executed.

Overall, the artwork leaves me a bit unsure, but there are some gems in there, and the colours really do help. The images really suit the text, in hue, tone and saturation, and not just for flashbacks. The amount of work going into those last pages is impressive, and needs commending, though.

I liked it. I really liked it. I appreciated what Roberts did in the almost final pages, although it was a bit confusing at times. I'm glad there was no need for subtlety. I enjoyed how everything was turned down a notch, in terms of action, pacing and even colour saturation. One minor negative point I do have concerns the artwork, which doesn't always work. But it is a minor point.

I'm still unsure at the Overlord situation having been resolved so quickly, and similarly with Ultra Magnus' condition – although it wasn't entirely unsurprising, actually. The final page, while it will undoubtedly work in upcoming issues, felt almost forced after Rewind's message. We'll see where this goes, and whether what is left of the crew will indeed Remain in Light.

84forever wrote:Yuck! Transformers were never this emotional when I was a kid. Roberts has the whole crew acting like a bunch of girls toys!

Could you please re-phrase the last part of that statement?
Some of us, me included, can find it offensive that, apparently, girls cannot enjoy Transformers, or that emotions are not something that boys have.
Re: Transformers: More Than Meets The Eye Ongoing #16 Preview (1481498)
Posted by Matrix. on April 24th, 2013 @ 6:20am CDT

84forever wrote:Yuck! Transformers were never this emotional when I was a kid. Roberts has the whole crew acting like a bunch of girls toys!

One day, my friend. One day you'll discover fiction for adults. You'll find out all about emotions, relationships and how they're key to telling a good story.

And then! Then the wonders of relationships will be open to you as well. You'll be sensitive, you'll be caring. You'll understand the opposite sex. You'll enjoy good literature.

Va'al wrote:I only read the print issues, and the digital review copies.
Sorry to hear that, have you been in touch with ComiXology?

Yeah. I sent them an email. apparently I'm not the only one though according to the IDW Forums. Just hope they fix it soon. it's so close and yet so far