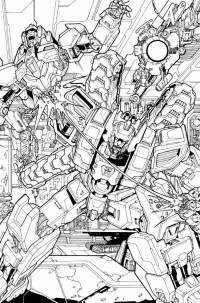 The official Transformers facebook page has shared the first five pages of Alex Milne's uncolored and unlettered line art from Transformers: More Than Meets The Eye Ongoing #5 with his commentary on each page. Mirrored below for those without facebook access.

PAGE 1- Fortress Maximus is tearing apart one of the Decepticons very much in the same fashion as Overlord did to Guzzle in Last Stand of the Wreckers #5, page 1. Was this script-specific or did you decide to do it this way? It’s a heck of a way to acknowledge what Fort Max went through in this previous series.

ALEX MILNE: It was in the script to be drawn this way. I just slightly changed the positioning of Fort Max

PAGE 2- Fort Max gets “creative” with the remaining Decepticon. Again how creative would you allowed to be in putting the panels together?

ALEX MILNE: It was all written in the script, what writer James Roberts wanted to see. The first panel is also a callback to LSOTW. I just laid out how I thought it should look, and what panels I felt needed to be larger then others. The only panel that James was specific on how it should look was panel one.

PAGE 3- The characters are reflecting on what just happened and there’s a lot to keep track off. How difficult is it to get so much into the panels?

ALEX MILNE: That really depends on what’s written in the script and what James has going on in the panel. I read over the description of what is wanted, and then I decide what I want to focus on in each panel. With this page, panel one is the real establishing shot for the first part of the story. We saw background in pages one and two; but on page three, panel one, we see most of this medical ward and a lot of the characters in this part of the story. It was a lot of fun to work on.

PAGE 4- Things get serious with Pharma. It’s been noted that he and Ratchet look a little similar, especially in head design. Was this done on purpose to give them some kind of other connection other than they know each other?

ALEX MILNE: Yes, it was. When coming up with the design for Pharma, I felt that since Ratchet and he went way back, that Pharma might have been Ratchets protégé at some point. Ratchet mentored him and taught him everything he knows. Ratchet even wanted Pharma to take his place, which we learned in the last issue. What I really wanted with Pharma was for him to have a feeling that he and Ratchet were like family.

PAGE 5- Revelations about Pharma and Ambulon come to the fold. When you were designing these guys, what were the things that sprang to mind, and will you show us their alt modes in the future?

ALEX MILNE: When I designed Pharma, I came up with his alt-mode first, then worked out the robot mode from that. I knew I wanted him to be slender, but a bit more bulky then First Aid. He was also going to be bigger then ratchet since he’s a jet. With Ambulon I kept his design very plain, so that you wouldn’t know what his alt-mode was from first glance. We find out why in the issue. As for seeing their alt modes, maybe one day!

Is anyone else as impressed with Alex's work on this series as I am? It's far crisper, cleaner, less cluttered, and just bursting with wonderful details. I am also really enjoying the character designs.
Re: Transformers: More Than Meets The Eye Ongoing #5 Line Art with Artist Commentary (1388921)
Posted by TechMenace on June 11th, 2012 @ 6:23pm CDT
The artwork for this comic is amazing, really nice. The story line is great to